SpaceX's Falcon 9 rockets will be grounded until at least September, as the company continues to study the cause of its 29 June launch failure.

Preliminary assessment of a vast quantity of telemetry data from that flight, which was carrying supplies to the International Space Station, indicate failure of a strut supporting a second-stage helium tank, which resulted in over-pressure and destruction of the stage. The helium is cooled to cryogenic temperature and used to maintain liquid oxygen tank pressure as that gas is depleted during burn.

SpaceX founder Elon Musk, holding a press teleconference to outline the initial failure assessment, added that the first stage had performed without issue, and in fact continued to provide power several seconds after the second stage failure began, about 139s after lift-off from Cape Canaveral.

The Dragon cargo capsule would have survived the accident had its parachute been deployed. “We could have saved Dragon if we'd had the right software there”, which all and future missions will carry, said Musk.

But while the strut's failure is the most probable cause of the rocket's destruction based on data analysed so far, Musk stressed that SpaceX wants to look very, very closely for any issues that might count as “near misses”. And, all customers – NASA, the US Air Force and commercial clients – also need to be “brought onboard” as SpaceX takes action to resolve the problem and restore confidence in Falcon 9.

Reverifying the strut design itself is a “few months” work, but a more extensive analysis will push a return to flight back to at least September 2015.

Musk also stressed that the incident should not affect SpaceX's push to begin crewed Dragon flights to the ISS under its NASA Commercial Crew contract. Those flights, which will also be provided by Boeing with its CST-100 capsule, will be the first US crewed flights since the retirement of the Space Shuttle fleet in 2011.

But the spectacular failure of the last Falcon 9 flight may have shaken Musk's confidence, as the root cause of the incident remains uncertain. Data on hundreds of struts like the one that failed – Musk declined to detail the part, except to say it is made of steel and is about 2ft long (60cm) and 1in (2.5cm) thick at its fattest point – say it shouldn't have failed under the load it experienced.

Rocketry, he noted, is an activity where a “passing score is 100% every time”, and he volunteered that this failure, which followed a run of 20 successes over seven years, is a sign of “a company as a whole that has become a little complacent”. 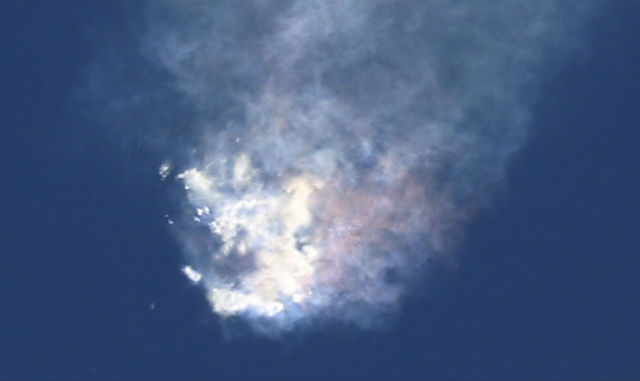