Boeing has submitted detailed plans to possibly increase 777X deliveries by 25% to 125 aircraft per year after 2021 using one production line in Everett, Washington, with only minor investments required to reach that target at the final assembly stage, according to documents filed as part of a permit application with a state environmental agency.

A “technical support document” prepared by the Washington State Department of Ecology and dated last September shows that Boeing has divided the 777X production ramp-up into two phases.

The first phase has two parts and the first began a year ago with the building of several new production facilities in Everett, Washington. That effort – highlighted by a massive new composite wing fabrication and assembly facility – supports Boeing’s plan to begin assembling the first 777X on schedule in 2017. In the second part of phase 1, Boeing plans to ramp up 777X deliveries as output of older models such as the 777-300ER, 777-200LR and 777 Freighter, wind down.

A previously undisclosed second phase of the project could began as early as 1 December 2021, according to the documents. Boeing’s production rate could rise to “as many as 10.4 777Xs per month (about 125 777Xs per year)”, during this phase, the stage agency’s documents show.

Despite a roughly 25% increase in output, Boeing’s investment in phase 2 would be relatively modest compared to the initial ramp-up of the 777X to match the current rate of 8.3 per month by 2021. 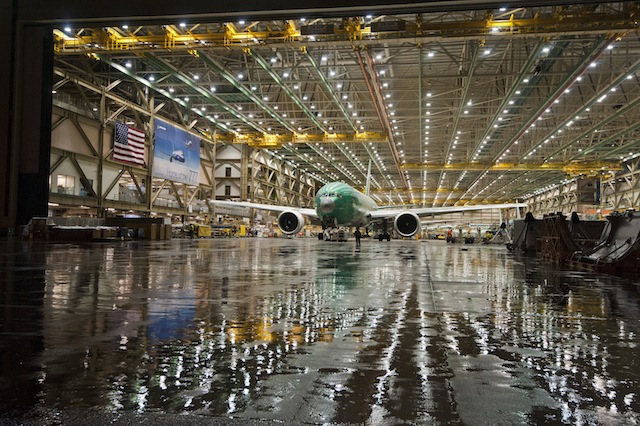 Boeing would only need to add tooling and equipment to existing and new facilities erected during phase 1 to meet the higher rate in phase 2.

The documents also say that the rate increase to 10.4 aircraft per month is a “tentative” plan and subject to decisions to be made later by Boeing management.

Boeing only confirms that the first 777X is scheduled to begin assembly in 2017 on a low-rate initial production line, which is being erected adjacent as part of a new extension of the sprawling widebody aircraft assembly complex in Everett.

“No future rate decisions beyond the current 777 rate have been made at this point,” Boeing adds.

But the the company needs to anticipate “any and all future possible requirements”, Boeing says. “Part of this evaluation requires Boeing to take action years in advance to ensure environmental permits, tools and parts are complete and ready to support our potential requirements.”

There is more evidence that Boeing has set a monthly production rate of 10.4 as a maximum target for the 777X programme. In 2013, Boeing had sent a request for proposals (RFP) to several states while searching for alternatives to Everett for basing the composite wing facility and 777X final assembly line. That RFP noted such facilities must be able to support a rate of up to 10.4 777X aircraft per month.

If Boeing decides to execute the rate increase, the 777X would own the record for the busiest single widebody assembly line in the world, beating the previous 10 per month peak rate for the Airbus A330/A340 line in Toulouse, France. The 787 production rate is rising to a peak of 14 per month by the end of the decade, but the deliveries will be split between separate assembly lines in Everett and North Charleston, South Carolina.

But a decision to increase production rates contradicts several industry forecasts showing that the 777 will struggle to maintain a monthly rate of 8.3 per month through the transition to the 777X in 2020.

Although Boeing expects to maintain the existing rate through the transition, the Flightglobal fleet forecast projects the number of 777 deliveries in 2018 will decline by 36% and total only 64, representing a monthly rate of 5.33.

If that projection becomes reality, then increasing the monthly rate to 10.4 would require a doubling of output rather than just an increase of 25%, Morris says.

“Perhaps they are simply signaling their supply chain to invest and plan for such higher rates early in the 777X cycle rather than later,” he adds.

Boeing’s latest 20-year market forecast anticipates demand for 3,520 new “medium widebodies” through 2034, a segment the company links to aircraft such as the 777 and Airbus A350-1000. That implies an average of 176 deliveries per year over that time period, leaving ample room for Airbus and Boeing to increase production over the long-term. 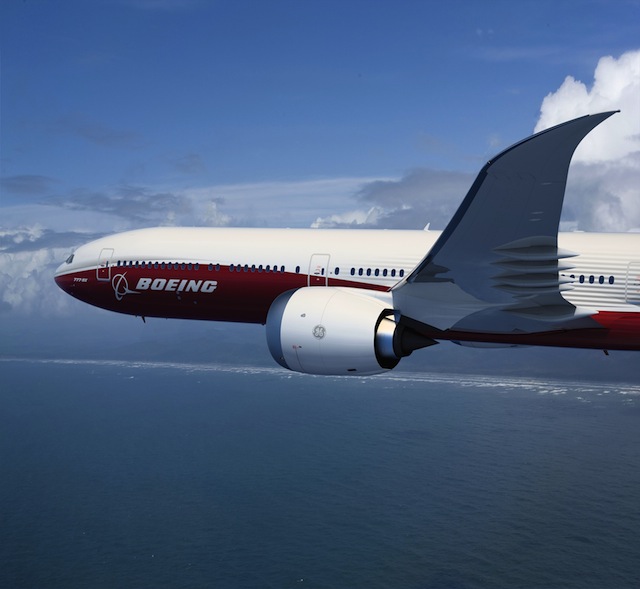 In the near-term, Boeing is focused on keeping the 777X development on track. The company plans to enter the detailed design phase later this summer, Boeing vice-president and general manager Scott Fancher told journalists at the Paris air show on 17 June.

So far, the design requirements “have been very stable”, Fancher says. That stability has allowed the company to accelerate development of the aircraft’s many internal systems, which should “ensure an even more reliable airplane at entry into service”, he says.

Boeing has released two detailed descriptions of the 777-9X over the past nine months that reveal only one exterior configuration change. An airport planning document released last September lists the width of the wheelbase of the main landing gear as 12.8m (41ft 10in). An update of that document posted in May shows the width has narrowed to 10.9m.

The latest version of the “777X Airport Compatibility Brochure” also intriguingly lists the maximum take-off weights (MTOW) for the 777-9X and 777-8X in public for the first time. Both 777X variants are listed with a common MTOW of 351,534kg, or 1kg less than the listed MTOW for the 777-300ER. The weight also may have a symbolic meaning, as it converts into English measurement as 777,000lb.

How Boeing achieves a common MTOW with both 777X variants and the 777-300ER is not yet clear. The updated copy of the airport compatibility brochure does not list any operating empty weights for the 777X types. But the 777-9X fuselage will be longer than the 777-300ER by 2.9m, with a horizontal stabiliser wider by 3m and an unfolded wingspan greater than 7m. The engine pylons, meanwhile, are moved 1m outboard on the 777-9X compared to the 777-300ER.

Although the requirements have remained stable, Boeing has made several tweaks to the 777-9X design since the programme was launched in late-2013. For example, Boeing has removed the hybrid laminar flow control system from the vertical fin of the 777X. The system was invented for the 787-9 and 787-10 to cut drag by up to 1%. But the system was deleted from the 777-9X configuration because the aircraft did not need the performance boost, Boeing says.

Although GE Aviation has confirmed the GE9X fan diameter has widened slightly to 340cm (134in), Boeing’s Fancher says the diameter and the 105,000lb-thrust power level have been unchanged in the last two years.

“The baseline engine was set two years ago, I think, and hasn’t changed since,” Fancher says. “Early in the design we saw some iteration. But the basic engine fan diameter hasn’t hanged in a couple years. The thrust hasn’t changed in a quite a while.”