Chorus plans to use 60% of the investment from Air Canada to purchase nine additional 76-seat Bombardier CRJ900s, which will be delivered in 2020, says Chorus chief executive Joe Randell on an investors call today.

As part of the investment in Chorus, Air Canada will receive a seat on Chorus' board and has nominated its chief financial officer Michael Rousseau to the position. Montreal-based Air Canada has committed to hold its investment for at least 60 months.

The Star Alliance carrier will make the investment in Chorus through the subscription of more than 15.5 million Class B voting shares at C$6.25 per share. Air Canada will own about 9.99% of Chorus' issued and outstanding Class A and B shares upon closing of the deal.

The amended CPA will see growth through the addition of larger-gauge aircraft such as the CRJ900, and will provide C$2.5 billion in minimum contracted revenue to Chorus. Of this, about 65% or C$1.6 billion will be generated from aircraft leasing revenue. The remaining C$940 million will comprise incremental contracted revenue, including C$310 million in fixed fees and C$630 million of aircraft leasing fees under the CPA.

Under the amended CPA, 15 Bombardier Dash 8-100s will exit early, leaving the fleet this year. The existing CPA had planned for the type to leave after 2024. On the other hand, the amended CPA will extend 15 Bombardier CRJ200s through 2025. Those aircraft had previously been planned to exit the agreement after this year. 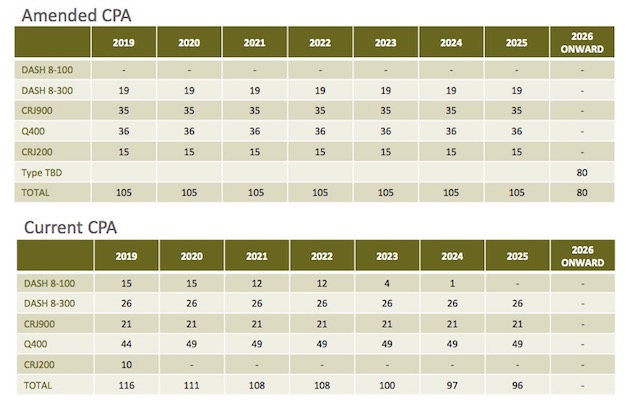 Three of the nine new CRJ900s will be delivered by mid-2020, with the remaining six to arrive by end-2020, says Chorus' chief financial officer Jolene Mahody. Separately, five CRJ900s sourced by Air Canada will be delivered in the first half of 2019.

In 2025, another five aircraft will be added to the CPA. The aircraft types have not been determined, says Chorus. Beyond 2025, there will be potential for additional lease extensions and renewals on existing and new aircraft to Air Canada. These opportunities will be in addition to the C$1.6 billion of aircraft leasing revenue projected from the amended deal.

Air Canada will see near-term cost savings in fixed fees, mostly in 2019 and 2020, of about a C$36 million in each year. But Chorus says these reductions "are significantly more than offset" by the incremental leasing revenue under the CPA.