Online retailer Amazon's plans to locate half of its highly-sought after second headquarters in a Washington DC suburb comes as the region's airports and airlines are in growth mode, primed for the influx of new economic activity.

The Seattle-based company officially announced that it would bring roughly 25,000 high-paying white-collar jobs to the Crystal City – or "National Landing" as Amazon puts it – neighbourhood of Arlington, Virginia, as well as the borough of Queens in New York today. The news followed more than a week of reports that such a move was imminent.

The investment comes as Ronald Reagan Washington National airport, literally steps from the new headquarters, is in the midst of a $1 billion expansion programme, with its largest carrier American Airlines already planning growth.

Washington Dulles International airport, the region's main global gateway, is two-years away from being connected to the region's Metrorail system and its hub carrier, United Airlines, is evaluating an up to 50% increase in flights.

"We look forward to the economic benefits that being near this new headquarters will bring to Reagan National and Dulles International airports and to the entire National Capital Region," says a spokesperson for Dulles and National operator the Metropolitan Washington Airports Authority (MWAA) on Amazon's announcement.

Baltimore/Washington International airport, the busiest in the region but the furthest from Amazon's new headquarters, is adding five gates for its largest Southwest Airlines, which has its own growth ambitions from the field.

American has plans to grow at Washington National once MWAA completes its Project Journey expansion in 2021. The Fort Worth, Texas-based carrier aims to replace most of the small regional jets it flies to the airport with 76-seat aircraft once a new 14-gate regional concourse opens.

"Today we have 14 gates that are restricted to 50-seat regional jets, when we get to the new regional terminal opening out into 2021, that will allow those 14 gates to handle up to 76 seaters," said Robert Isom, president of American, in September.

The restricted gates are the 14 remote aircraft parking positions that passengers are bussed to from gate 35X, widely despised by travellers, at the airport.

The under construction commuter concourse at Washington National

If American replaces all of its 50-seat aircraft flying at Washington National with 76-seat aircraft, like the Bombardier CRJ900 and Embraer 175, that would represent an 8% monthly increase in seats, FlightGlobal schedules data for November shows.

"The Greater Washington area is great place to do business – it’s a vibrant region with a diverse and talented workforce," says the airline. "We look forward to welcoming the Amazon team to Northern Virginia.”

American and other carriers cannot add more flights at National, only shift to larger aircraft, due to slot restrictions that limit the number of operations at the airport.

The $1 billion Project Journey works include two new consolidated checkpoints that will move National Hall in terminal B/C inside the secure area, easing connections and creating more space for passengers waiting for flights, in addition to the new concourse. 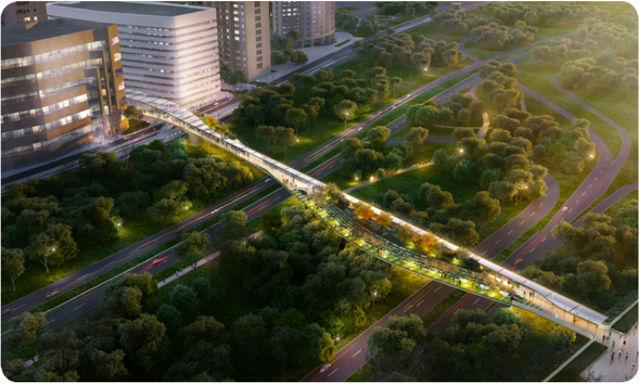 A key component of Amazon's 2017 request for proposals to cities for second headquarters sites was an international airport within a 45min drive of the site.

Dulles is the DC-area's main international gateway and, according to Google Maps, less than a 30min drive from Crystal City. United operates nearly two-fifths of international seats, and 63% of all seats, from the airport, in 2018, schedules data shows.

The Chicago-based carrier is in the midst of a growth kick at the airport, with seats scheduled to increase 5.8% this year, and – prior to Amazon's announcement – was evaluating a dramatic increase in the number of flights it operates from Dulles.

United operates four banks of flights – periods when a number of arriving and departing flights are bunched together – from Dulles today, and is considering increasing that to six banks, airline president Scott Kirby told reporters in August. 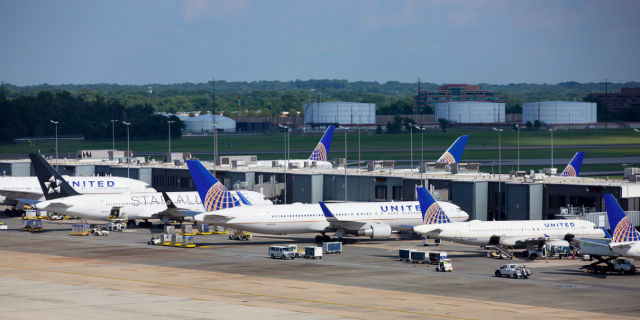 United's concourse C/D facility at Dulles, which is relatively desolate outside of its four banks, can accommodate additional flights spread throughout the day. In addition, the airline and MWAA are working on a two-level addition to concourse C that could include both a new premium Polaris Lounge as well as additional international arrivals facilities.

Dulles, and to a lesser extent BWI, benefits from none of the constraints at National. It is not slot constrained, and not restricted by the close-in airport's 2,012km (1,250 mile) perimeter that, besides some notable exceptions, keep service to the close-in airport limited to primarily the US East Coast and Midwest.

The airport has added new service to Hong Kong and Costa Rica this year, with Alitalia planning to begin flights to Rome and United flights to Tel Aviv in 2019.

“As the airline with a world-leading route network that includes growing, international hubs in [the Washington DC and New York] markets, we are uniquely positioned to serve these communities as they capitalise on the exciting opportunities that are headed their way," says United, adding that the airline is "excited" about the prospects of Amazon's investment.

Any air service growth driven by Amazon is likely to accelerate these plans and the growth DC area airports are already experiencing. Passenger numbers are up 4.5% to 18 million at Dulles year-to-date through September, and down 1.8% to 17.6 million at National, MWAA statistics show. However, numbers at National remain well above its historic design-capacity of around 15 million passengers annually, handling 23.9 million in 2017.

"Dulles International remains the growth airport for the Washington area," the MWAA spokesperson says. "Reagan National is operating at capacity, which is why the airport has a major construction project underway."

Dulles is on track to handle 5% more seats, and National 0.5% more this year than in 2017, schedules data shows.

Updated with comments from American and United.