American and Hawaiian weigh in on China setting off clash

American Airlines and Hawaiian Airlines are weighing in against different aspects of Delta Air Lines and United Airlines applications for new service to China.

Fort Worth, Texas-based American objects to Delta's request for seven weekly frequencies for a new daily flight to Shanghai Pudong from Minneapolis/St Paul, the airline says in a filing with the US Department of Transportation on 6 November. It argues that the regulator cannot grant the frequencies, and a similar one by United, without denying its own request for a dormancy waiver.

Honolulu-based Hawaiian, on the other hand, objects to both Delta and United's request for a start-up date in 2020 for their proposed new routes to China, in a separate filing on the same day. Granting the requests would be a tacit endorsement of the airlines' "warehousing" the frequencies for nearly two years, it argues.

US airlines are restricted to 161 weekly frequencies – or 23 daily flights – to Beijing, Guangzhou and Shanghai under a 2007 air services agreement between China and the USA. All of the authorities are currently allocated, save for seven that were recently returned by Hawaiian and United, and seven designated for service to Guangzhou. 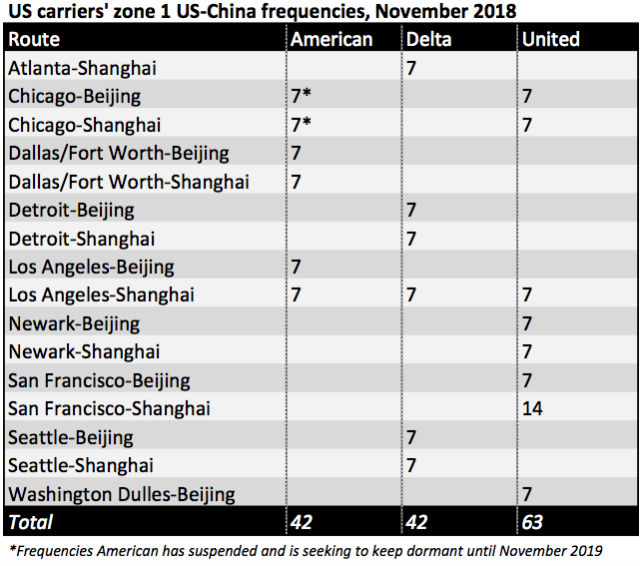 American, Delta and United are at odds over 21 of those frequencies. The former wants to hold onto 14 for a year that it previously used for service to both Beijing and Shanghai from Chicago O'Hare, while Delta and United each want seven frequencies to begin new flights to Shanghai in 2020.

Atlanta-based Delta has asked the DOT to begin a proceeding for all 21 frequencies if another airline applied for the seven it seeks for its Minneapolis-Shanghai flight, a move that occurred with United's application.

Chicago-based United claims its application does not compete with Delta, arguing that with the seven frequencies it seeks for a second daily flight between Newark and Shanghai can be filled with some of the ones American wants to warehouse until at least November 2019.

United has the largest portfolio of frequencies to serve Beijing and Shanghai with 63, followed by American and Delta with 42 each.

The DOT must decide whether it will hold a proceeding for all 21 frequencies as Delta wants, a competition for just the seven sought by Delta and United, or some combination of the two approaches with American.

The last competition among US carriers for China frequencies was between American and Delta in 2016. Both sought to add a daily flight between Los Angeles and Beijing, with the regulator ultimately granting American's application.

The renewed competition by US carriers for access to China comes after an extended period of weak performance in the market. In addition to American's decision to end service to Beijing and Shanghai from Chicago with executives calling them "colossal loss makers", Hawaiian ended its Honolulu-Beijing service in October, and United suspended flights to Hangzhou and Xi'an from San Francisco.

The US carriers repeatedly cited competitive pressures in the market, largely driven from the rapid expansion of Chinese airlines as they used up their allocation of frequencies under the bilateral agreement.

Chinese carriers grew capacity 34% and 15.6% in the market in 2016 and 2017, respectively, FlightGlobal schedules data shows. Overall capacity between China and the USA increased 19.7% and 9.1% during the respective years.

"China has rebounded for us," said Scott Kirby, president of United, in August. Demand from Beijing and Shanghai, while still below historic levels, was beginning to rebound, he added.

China is a key growth market in the long term for US carriers. American, Delta and United have all inked partnership agreements with a Chinese carrier – China Southern Airlines, China Eastern Airlines and Air China, respectively – and grown their own presence in recent years.

"We believe in China's future as a robust market for the Hawaiian vacation experience," said Hawaiian chief executive Peter Ingram in July with the announcement that it would exit the market. He added that China demand did not grow as fast at the carrier expected when it began Beijing flights in 2014.

Delta and United's frequency applications, however, could be driven more by a desire to block competitors – particularly American and Hawaiian – from Beijing and Shanghai than a desire to tap unmet demand.

Some Chinese carriers and US carriers have spoken in favour of a more liberalised air services agreement between the two countries, however, US authorities have shown little desire for such a move.