Avianca, Copa Airlines and United Airlines have reached an accord on an immunised joint venture that will see them cooperate on flights between Latin America and the USA.

United has also agreed to lend $456 million to Avianca's majority shareholder Synergy, secured by Synergy's equity and its 516 million shares of common stock in Avianca.

The three-way partnership among the airlines will include flights between the US and 19 countries in Central and South America, not including Brazil, and cover roughly 12,000 city pairs, says Chicago-based United in a statement. All three carriers are members of Star Alliance.

"This agreement represents the next chapter in US-Latin American air travel," says United president Scott Kirby in a statement. "We are excited to work with our Star Alliance partners Avianca and Copa… providing a better overall experience for business and leisure customers traveling across the Western Hemisphere." 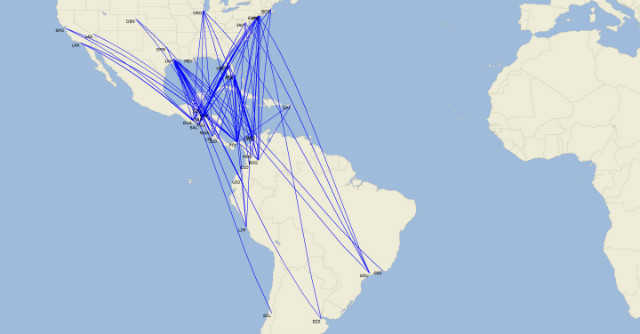 Avianca, Copa and United will coordinate capacity and fares, jointly market and sell flights, and share revenue under the deal, they say. The agreement requires regulatory approval by the countries.

The airlines say they will add new markets and additional flights on existing routes if the partnership is approved.

Joint ventures are increasingly popular among airlines globally, as the deals essentially allow them to collude legally with competitors in certain markets.

American Airlines and LATAM Airlines Group, the largest carriers between Latin America and the USA, are already seeking regulatory approvals for their planned joint venture. Aeromexico and Delta Air Lines have had an immunised tie-up between Mexico and the USA since 2017.

"We think it will have a profound stabilising impact on the competitive environment," said Thomas Hollahan, global head of aviation at Citi, which advised United in the negotiations with Avianca, on the proposed pact earlier in November.

Avianca, Copa and United together will operate nearly 26% of capacity between Latin America and the USA this year, FlightGlobal schedules show. United, the largest of the three carriers, carries 15% of capacity in the market.

By comparison, American and LATAM carry nearly 32% of capacity and Aeromexico and Delta have nearly 17% of capacity in the Latin America-US market, data shows.

Avianca selected United as a strategic partner in early 2017, though negotiations on the final terms of the deal dragged out. In August, Copa disclosed that it was part of the discussions and that the carriers planned to form a three-way joint venture.

The airlines do not provide a timeline for implementation of the deal. However, Copa chief executive Pedro Heilbron said earlier in November that the Panama-based carrier does not expect regulatory approval of the tie-up until mid-2020.

"This will at best enter into effect towards the end of 2020," he said.

The $456 million loan by United to Avianca is payable in five annual installments starting on 30 November 2021, and to be repaid in full on 30 November 2025, says United. It adds that Synergy may repay in shares of Avianca common stock at market value, in an amount of up to 25% of any principal installment, or with cash from the sale of Synergy's shares in Avianca.

The loan bears interest at a rate of 3% per annum, says United.

In relation to the deal, United obtained an option to acquire up to 77.4 million shares of Avianca common stock from Synergy. This is about 15% of the Avianca common shares currently held by Synergy.

United also entered an agreement with Avianca's second largest shareholder Kingsland Holdings, granting Kingsland the right to put its shares of Avianca common stock to United at market price on the fifth anniversary of the loan agreement. The deal guarantees the obligation of Synergy to pay Kingsland if the market price of the stock falls below $12 per American depositary receipt on the New York Stock Exchange.

Synergy owns about 78.1% of Avianca common shares through its Delaware-incorporated subsidiary BRW Aviation. Kingsland holds a 21.9% stake of the common shares.

Story updated with details of United loan to Avianca