The industry’s most comprehensive on-time analysis recognises Japan Airlines (JAL) as the Asia-Pacific’s most on-time mainline airline for the seventh year running, and ANA as the most on-time airline network in the region.

Globally, Delta Air Lines is the most on-time mainline airline, and Qatar Airways has been named the world’s best on-time airline network.

This marks the seventh year in row that JAL has claimed the top spot, with 84.73% of its flights on time. In second place was another Japanese carrier, ANA (84.20%), followed by Singapore Airlines (83.52%). 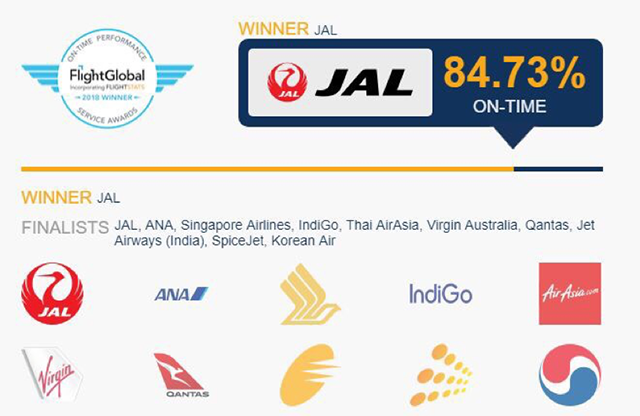 ANA is named as the Asia-Pacific’s most on-time global airline network**, with 85.25% of its flights on time, followed extremely closely by JAL (85.21%) in second place, with Singapore Airlines (83.52%) in third.

For the first time in the 10-year history of the awards, the Low-Cost Carrier (LCC) category has been jointly won – by Azul and Iberia Express. The two LCCs both recorded an average of 86.47% of flights on time in 2018.

“The passenger experience is fast becoming a key improvement area for airlines, and being on time is a critical contributor to that experience,” said Christopher Flook, chief executive of FlightGlobal. “The airlines topping the rankings should be immensely proud of this accolade for enabling the millions of passengers that fly with them each year to arrive at their destinations on time.”

“Airlines in Asia face a host of external challenges in terms of disruptions. Though these disruptors can’t be controlled, they can be managed by prudent planning and operations,” said Rahul Oberai, FlightGlobal’s VP Sales in APAC. “APAC carriers have shown a marked improvement in their timeliness, which is critical for their brand reputation.”

The OPS Awards rankings are determined from the analysis of more than 120,000 operated flights per day, along with real-time flight status, departure and arrival data curated from over 600 global sources. The awards have the most stringent and consistent criteria, with flight status coverage on at least 90% of scheduled flights.

* A flight is considered “on time” if the aircraft arrives at the gate within 14min 59s (less than 15min) of the scheduled arrival time.

** The OPS Awards define an airline network as a system of flights flown by a major airline, but also include the flights that are marketed by the carrier and are operated by its airline partners.

Our categories for OPS Awards are grouped into three areas: Global, Major (by region), and Low Cost Carriers. An award is given for network and mainline operations in each category. Click here for the full methodology and selection criteria.

FlightGlobal helps the aviation ecosystem drive superior performance and precision from the largest expanse of data, by setting commercial strategies, managing financial risks, keeping aircraft flying and improving traveller experience. People turn to FlightGlobal for unrivalled data sources, smart analytics and expert market insight to make more informed decisions. Our data and analytics business is the strategic partner to IATA and ARC and our publishing business leads industry-breaking news. Acquisitions of Diio, FlightStats, Innovata and Flight Ascend have advanced FlightGlobal’s portfolio, creating the most complex datasets in the industry. Making sense of your industry starts with making sense of the right data.