Greece should later this year complete the administrative work related to its planned acquisition of 70 Bell Helicopter OH-58D Kiowa Warrior armed scouts formerly operated by the US Army.

To be sourced via the US military's excess defense articles (EDA) programme, the reconnaissance helicopters, plus related weapons and other equipment, should be delivered from later this year. Initial operational capability with the type is expected during 2019.

Athens is advancing with the proposed acquisition following a 9 January approval from the Greek government's council for foreign affairs and defence, which recommended that the programme be allocated €44 million ($54 million). This sum will cover the cost of training flight and technical personnel, restoring the aircraft to active status following their shipment to Greece, and acquiring spare parts for an initial two years of operations.

The EDA package consists of 36 fully equipped aircraft, plus 24 that lack certain avionics, navigation and communication equipment and will be dedicated to training. The remaining 10 airframes are to be used for spare parts. 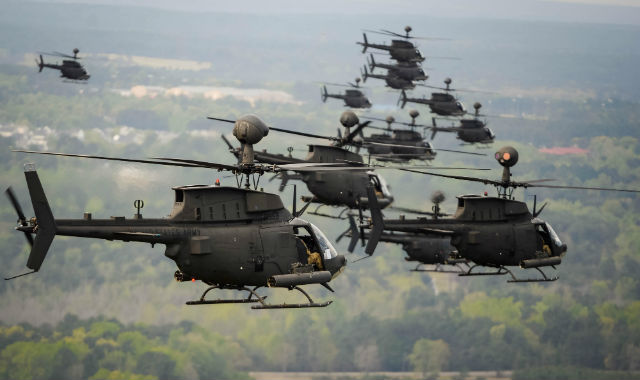 To be employed by the Greek army, the OH-58Ds will be armed with Lockheed Martin AGM-114K Hellfire air-to-surface missiles, Hydra-70 70mm unguided rockets and .50cal machine guns. The service is expected to deploy the rotorcraft to Greek islands in the Aegean Sea.

Greece will become the third nation to introduce surplus OH-58Ds via Washington's EDA programme, with Croatia having received 16 of the aircraft from 2016 and Tunisia in the process of fielding 24 examples.