The US military-led air strikes launched over Syria on 22 September against Islamic insurgents marked the debut for US Air Force Lockheed Martin F-22 Raptors in a strike role.

The campaign against Islamic State militants, which are expanding their territory in Iraq and Syria, saw the USA extend its air strikes into the latter country, supported by five Arab nations.

The strikes were split into three waves, with the F-22 seeing action in the second stage.

“The second wave consisted of F-22 Raptors in their first combat role, F-15 Strike Eagles, F-16s, B-1 bombers and drones that launched from bases in the region around 9:00 pm Eastern time against targets in northern Syria,” Lt Gen William Mayville, director of operations for the US joint staff, said on 23 September. 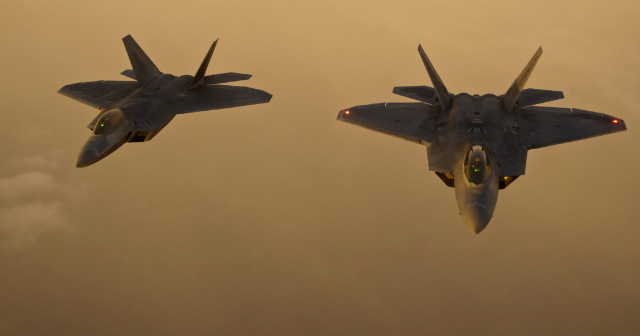 Mayville adds that the flight delivered GPS-guided munitions. A command and control centre was subsequently destroyed.

The USAF has 178 Raptors in service, the last of which was delivered in May 2012.

The first stage of the strikes, meanwhile, began at midnight Syrian time, and included 40 Raytheon Tomahawk cruise missiles launched from the USS Arleigh Burke in the Red Sea and the USS Philippine Sea in the northern Arabian Gulf.

Most of the Tomahawks were used against Khorasan Group targets – a Syrian-based al-Qaeda splinter group – with particular emphasis on their manufacturing workshops and training camps.

The USA led the attacks against Khorosan alone, and the Department of Defense says it is still assessing the results of the strikes.

“We did have good information that they were in the final planning stages of an attack against Western targets – potentially the US homeland or Europe,” Rear Adm John Kirby, Pentagon press secretary, said separately. “We’re not going to take our eye off this group, or their capabilities or their intentions,” he adds.

The third wave of attacks saw US Navy Boeing F/A-18s operated from the aircraft carrier USS George H W Bush in the Arabian Gulf and regionally-based Lockheed Martin F-16s – among others – attack targets in eastern Syria, including IS training camps and combat vehicles near Dayr az Zawr.

The “coalition partners” – Bahrain, Jordan, Qatar, Saudi Arabia and the United Arab Emirates – assisted in the second and third waves of strikes, Mayville says, “supporting with a range of combat capabilities that began with combat air patrols to actual strikes on targets”. Not all five conducted strikes, but they were all participants in the air operations.

“The preponderance of coalition support was in the third wave,” he adds. Approximately 96% of deployed munitions were precision-guided.

Meanwhile, the UK’s participation in the campaign is the subject of intense interest, amid reports that Prime Minister David Cameron will receive a formal request to conduct air strikes from the Iraqi prime minister, Haider al-Abadi, when they meet at the UN General Assembly in New York on 24 September. Parliament could also be recalled earlier than planned on 26 September, so as to decide on British intervention going forward.

“The UK government continues to discuss what further contribution the UK may make to international efforts to tackle the threat we all face from ISIL,” defence minister Michael Fallon said on 23 September, following meetings with his counterparts from Bahrain and Saudi Arabia.

Until now, the UK has been involved in a non-combat role in Iraq, delivering aid to displaced civilians using its Royal Air Force Lockheed Martin C-130J tactical transports, as well as using its Panavia Tornado GR4s and deploying its Boeing RC-135W Rivet Joint signals intelligence aircraft for the first time in reconnaissance operations. 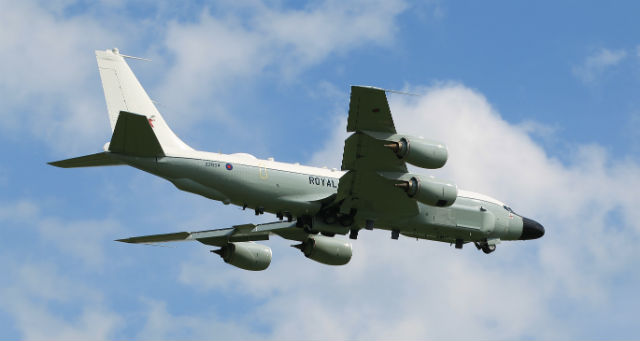 If the UK were to participate in the offensive element of the mission it is unclear whether it would also participate in strikes over Syria. The UK government last year failed to win a vote on entering the Syrian civil war to counter the Assad regime, and it is expected that Parliament would have to back any such strikes now.

RAF Tornados are already being operated in Iraq – albeit in a surveillance role – and their mission could easily be redefined to include aerial strikes.

On 23 September, US President Barack Obama said the coalition strikes demonstrated that this was not the USA’s battle alone. This was possibly a message to Western allies that the Arab nations have proved more valuable so far, by supporting the early waves of air strikes.