Airbus has recruited Zodiac Aerospace to jointly develop passenger facilities for the cargo decks of A330s and A350s.

Under an agreement signed at the Aircraft Interiors Expo in Hamburg today, the partners will from 2020 offer potential customers a range of different modules – with the same dimensions as regular cargo containers – as "certified solutions", Airbus says.

Facilities will include passenger sleeping berths, meeting rooms, office desks or open space that could be used, for example, as a lounge or children's play area. 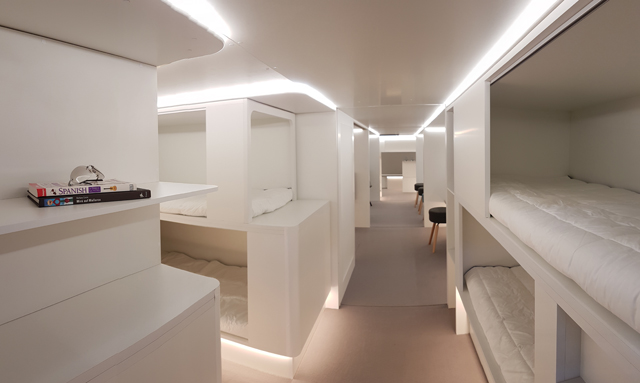 Airbus says the modules will not affect the cargo floor and loading system, and will be "easily interchangeable" with regular freight containers during a "typical turnaround".

However, aircraft will require modifications to allow access from the main deck and connections for electricity and passenger amenities.

Airbus head of cabin and cargo Geoff Pinner says the airframer will build demonstrator modules that will be flight-tested on an A330.

He says the product will initially be offered to A330 operators as both a line- and retrofit solution, as more then 150 aircraft are in service that are already configured to be equipped with crew rest compartments on the lower deck.

Airbus says it is studying "offerability of sleeper compartments" on the A350.

The project represents a first effort to "introduce passengers to the lower deck" and will offer "flexibility" to airlines, he says.

Christophe Bernardini, chief executive of Zodiac's cabin branch, says the supplier is "delighted" to be selected for this project, and that it will draw on its experience of producing lower-deck crew rest compartments.

He sees "improved passenger experience" as critical for airlines in attracting customers, and the lower-deck facilities as an opportunity for differentiation from competitors.