Alcock and Brown’s conquest of the Atlantic

To mark 100 years since the first transatlantic flight, we look back at the story of the historic crossing through the eyes of the Flight archive

"We have had a terrible journey.

"The wonder is we are here at all. We scarcely saw the sun or the moon or the stars. For hours we saw none of them. The fog was very dense and at times we had to descend to within 300ft of the sea.

"The flight has shown that the Atlantic flight is practicable, but I think it should be done not with an aeroplane or seaplane, but with a flying-boat. We had plenty of reserve fuel left, using only two-thirds of our supply."

The words of pilot Captain John Alcock after the world's first nonstop transatlantic flight, which he completed a century ago this month with navigator Lieutenant Arthur Whitten Brown.

That historic crossing by a twin-engined "Vickers Vimy-Rolls" was flown on 14-15 June 1919 between St. John's, Newfoundland and Clifden in the west of Ireland, in response to a challenge laid down by the Daily Mail and others. The prize was £10,000 from the Daily Mail, as well as "2,000 guineas" from the Ardath Tobacco Company and £1,000 from Lawrence R. Phillips, for "the first British subject to fly the Atlantic". 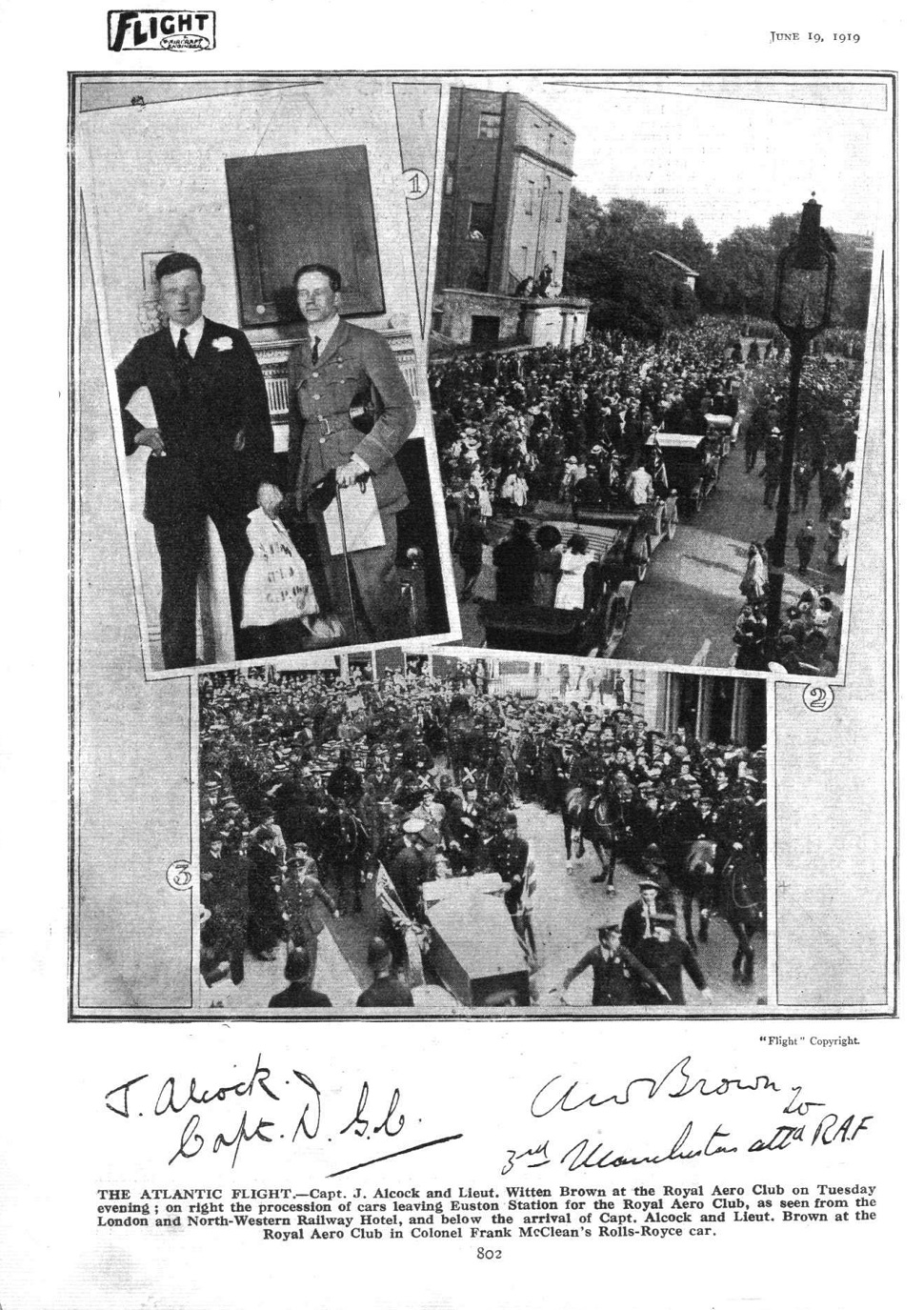 More than 1,200 airliners now make "the water jump" across the Atlantic each day, and a 100-years-ago Flight was in no doubt as to the importance of that accomplishment by Alcock and Brown, opening its 19 June 1919 issue as follows: "By their successful crossing of the wild Atlantic, Captain Alcock and Lieutenant Brown have achieved a performance which will remain a landmark in history throughout the ages, and have placed to the credit of Britain and her sons a record second to none in the story of achievement by land, sea and air." 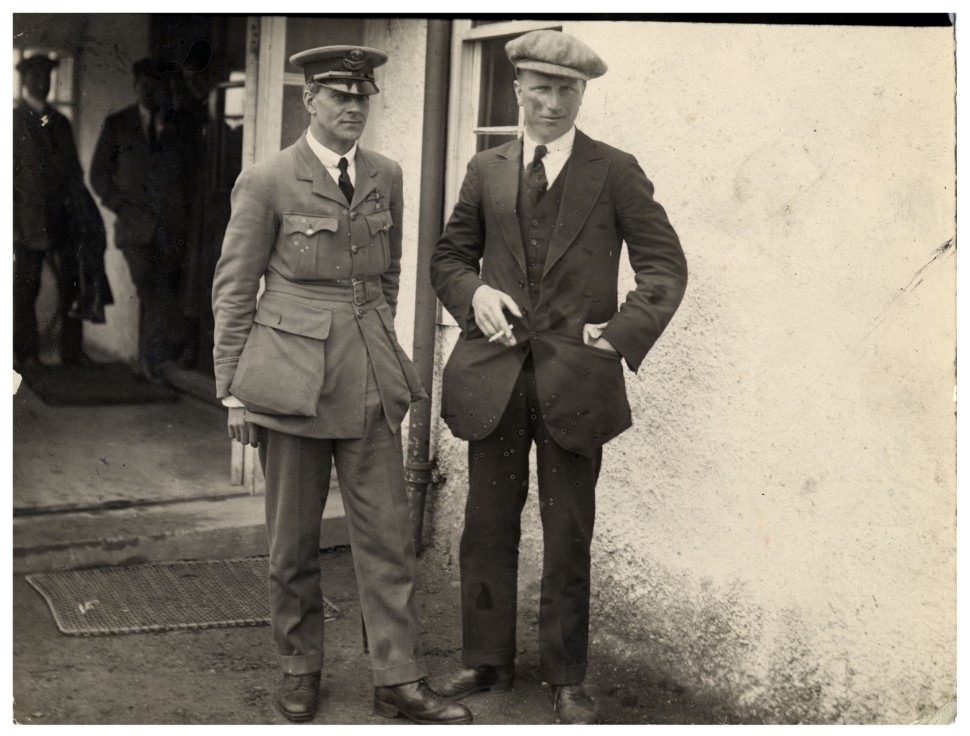 Flight provided indepth coverage of the adventure in that 19 June edition, describing the whole flight in full detail along with quotes from pilot Captain Alcock.

Flight wrote: "The news that the machine had definitely started on its voyage came in the form of the following message from Lieutenant Clements, RAF, the official starter at Newfoundland: 'Captain Alcock and Lieutenant Brown left St. John's, Newfoundland, in a Vickers-Vimy machine on a flight to England today, 14 June, at 4.13pm, Greenwich Mean Time.'

"Then followed a silence of a little over sixteen hours, ending by the following message from Capt. Alcock and Lieut. Brown to the Royal Aero Club, sent off from the wireless station at Clifden: 'Landed Clifden, Ireland, at 8.40am (GMT), 15 June; Vickers-Vimy Atlantic machine, leaving Newfoundland Coast 4.28pm (GMT), June 14. Total time 16 hours 12 minutes. Instructions awaited'."

Flight reported that for most of the flight of 1,950 miles, the Vimy averaged an altitude of 4,000ft. "But at one time – about 6am – in an endeavour to get above the clouds and fog, it went up to 11,000ft. Lieutenant Brown was only able to take three readings for position, one from the sun, one from the moon and one from the Pole Star and Vega."

Speaking to the Daily Mail about their "terrible journey", Captain Alcock described how the two voyagers battled ice and fog, which made the crossing treacherous when the airspeed indicator jammed.

"We looped the loop, I do believe, and did a very steep spiral. We did some very comic 'stunts', for I had no sense of horizon," said Captain Alcock.

"At any rate it went into a steep spiral, which only ended with the machine practically on its back about 50ft from the water," reported Flight. "The machine was covered with ice, and it continually became necessary to chip ice off the instruments, etc."

Captain Alcock continued: "An hour and a half before we saw land, we had no certain idea where we were, but we believed we were at Galway or thereabouts. Our delight in seeing Eashal Island and Turbot Island (five miles west of Clifden) was great. People did not know who we were when we landed, and thought we were scouts on the look-out for the Vimy."

His one regret was that the Vimy was damaged on landing: "From above, the bog looked like a lovely field, but the machine sank into it up to the axle and fell over on to her nose."

Flight wrote that the rough landing was unfortunate, as it was believed the intention had been for the flight to continue to London. As it was, the two adventurers had to travel by surface transport back home, but not before receiving a civic reception at Galway and an enthusiastic greeting on arriving at Dublin: "The students of Trinity College carried Captain Alcock into 'commons' where there was much cheering with some speeches. Eventually the provost rescued the pilot," reported Flight.

Captain Alcock and Lieutenant Brown crossed to Holyhead the following morning, where they were met by "Mr Pierson, the designer of the Vickers-Vimy, and by Captain Vickers… At Crewe Mr Claude Johnson, managing director of Messrs Rolls-Royce Ltd, joined the train".

Flight reported that on the platform at Euston the crowds were so great that "General Sir Capel Holden, the Vice-Chairman of the Royal Aero Club, was unable to get close enough to shake hands with Captain Alcock".

The two then travelled in a procession to the Royal Aero Club for "a very hearty reception", after which they stepped out onto the balcony to be greeted with loud cheers by the gathered crowd.

"I must say the flight has been quite straightforward," said Captain Alcock. "Although we had a little difficulty in keeping our course, Lieutenant Brown did very well and steered a wonderful course. With regard to the flight itself all the credit is due to the machine, and particularly the [R-R Eagle] engine – that is everything."

Shortly after completing their epic journey, the two men were honoured at a reception at Windsor Castle where they were knighted by King George V.

Sadly, Sir John Alcock died just six months later, aged only 27, in an accident in France while flying the Vickers Viking amphibian prototype to Paris for the "Salon". His funeral took place at Manchester Cathedral with military honours on 27 December 1919.

In his sympathy message, the King told Alcock's family: "Your distinguished son… will ever occupy an honoured place in the roll of British airmen who never spared themselves in order to uphold the honour of their country." 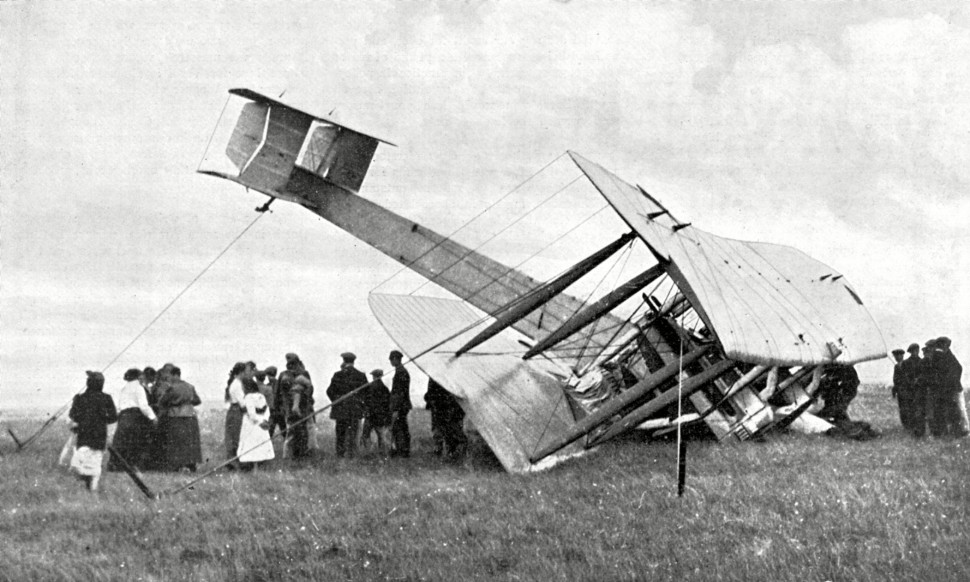