Boeing tankers refuel each other in KC-46 milestone test

The fuel transfer took place during a 3h, 40min-long flight on an undisclosed date, Boeing says. Both aircraft took off and landed at Boeing Field in Seattle and achieved the maximum fuel off-load rate of 1,200 gallons per minute. Having one KC-46 refuel another KC-46 was another step toward receiving the US Federal Aviation Administration’s supplemental type certificate, the approval Boeing needs to modify the commercial 767-2C into a military tanker.

The KC-46 now has demonstrated the ability to receive fuel from three tankers in the USAF fleet: KC-46, KC-135 and KC-10 aircraft, Boeing says. It also has demonstrated refueling with other aircraft including the F-16, F/A-19, AV-8B, C-17 and A-10. To date, the programme's test aircraft have completed 2,700 flight hours and more than 2,500 contacts during refueling flights. 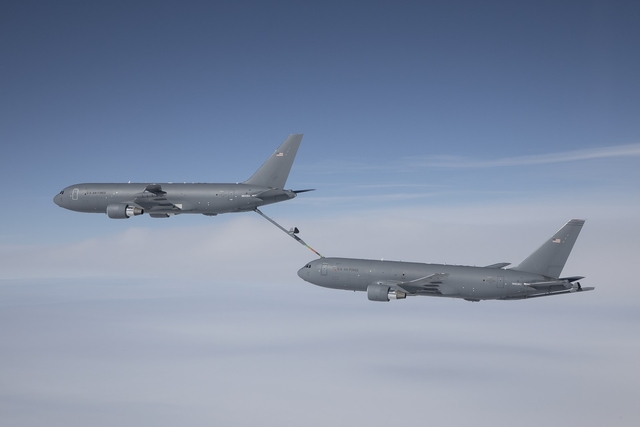 Primarily, the KC-46 will be used to refuel other aircraft, but also must be able to take on fuel while flying to extend its operational range. The tanker’s boom system can transfer up to 4,540l (1,200gal) of fuel per minute, while the Cobham-supplied hose and drogue systems, located on both the plane's wing and centerline, enables the KC-46 to refuel probe-equipped aircraft with up to 1,510l of fuel per minute.

Progress towards the Boeing KC-46 receiving its full FAA certification comes several weeks after Secretary of the Air Force Heather Wilson criticiced Boeing for what she believed will be further delivery delays of the aircraft. The USAF had expected Boeing to deliver the first KC-46 by the end of 2017. The airframe manufacturer said it would deliver by the second quarter of 2018, but the USAF believes it will miss that target date too.

For its part, Boeing said in response to Secretary Wilson’s comments that it was doing all it can to deliver the tankers as soon as possible. However, the firm did not guarantee that the first batch of tankers would be delivered by the second quarter of 2018.