Comac's first C919 prototype took its third flight on 3 November, a day after the manufacturer ran the engines on its second prototype for the first time.

Aircraft B-001A took off from Shanghai Pudong International airport at 07:38 local time. Comac tells FlightGlobal the aircraft completed 48 test points including the retraction and extension of its landing gear, banking turns, and tests of its longitudinal and transverse stability.

The narrowbody flew for 3h 45min, largely over Nantong city in the Jiangsu province and reached a maximum altitude of 3,000m. There were three test pilots and two flight test engineers aboard the aircraft. 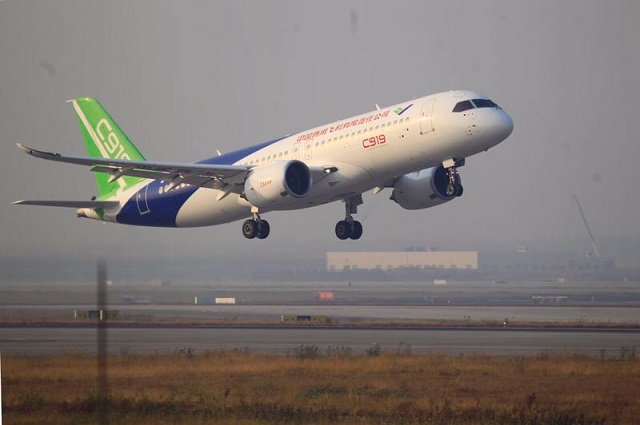 The Chinese airframer adds that it also successfully powered-up the CFM International Leap-1C engines on its second flight test aircraft.

The jet will next conduct on-aircraft tests to ensure the functions of its various systems, in preparation for taxi tests and a first flight. The target is for the aircraft to fly by the end of the year.

Comac is using a fleet of six test aircraft for its C919 programme, and will be conducting flight tests across sites in Shanghai, Xian and Dongying. The manufacturer has progressed slowly on flight tests, having conducted only two flights following its maiden sortie in May. Aircraft B-001A was also originally scheduled to be transferred to Xian in September, but this has yet to happen.

Comac is targeting for the aircraft to achieve certification and enter into service in 2020-2021. It has so far received 730 commitments for the type from 27 customers.