Dynetics was selected for phase 3 of the Defense Advanced Research Projects Agency’s Gremlins programme, an effort to launch and retrieve unmanned aerial vehicles from an aircraft.

The phase 3 contract is a 21-month, $38.6 million award. The company beat General Atomics Aeronautical Systems to advance from phase 2, and Kratos Defense & Security Solutions and Lockheed Martin to advance out of the first phase of the competition.

For phase 3, Dynetics plans to attempt in mid-2019 to launch and retrieve its UAV from the cargo door of a Lockheed Martin C-130 Hercules flying at about 150kt. By the end of the programme, the company aims to demonstrate four UAV recoveries in under 30min. 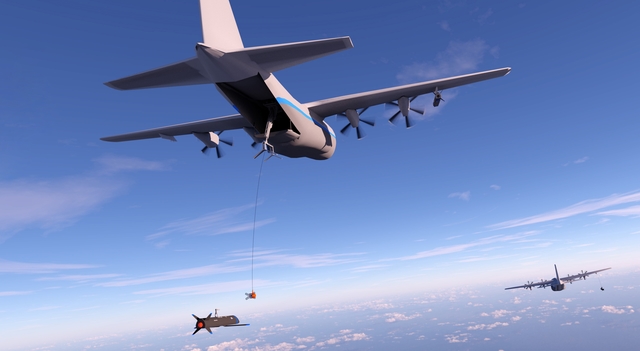 The ability to launch and retrieve UAVs from a C-130 Hercules could be used to extend the range of UAVs in support of tactical strike, reconnaissance and surveillance, and close air support missions, said Tim Keeter, deputy programme manager and chief engineer for the Dynetics Gremlins team.

“It does mean inherently smaller sizes (for the drones) because they don’t have to carry the extra fuel to launch and return,” he said. “You could load these on fighters, bombers or cargo aircraft, and transport them a long ways before they begin their mission.”

Kratos Defense is developing a clean-sheet UAV for Dynetics’ Gremlins system. Keeter of Dynetics declined to offer details on the UAV’s design other than to say that it will have a range greater than 521nm (965km), turbo jet propulsion and 700W to 1kW of power available for sensor payloads, per DARPA’s requirements.

Dynetics’ Gremlin system works by unreeling a UAV out the open cargo bay door of a C-130 Hercules via a winch and cable, and then at a safe distance releasing the drone to fly on its own power. To reel the drone back into the aircraft an attachment at the end of the cable grabs hold of the drone in flight – after which the drone’s engines are powered off – and it is reeled closer to the back of the C-130 Hercules until a mechanical claw grabs hold of the UAV and pulls it inside the aircraft’s cargo bay.