A Lockheed Martin F-22A Raptor skidded on its belly across the runway of NAS Fallon near Reno, Nevada on 13 April after a takeoff mishap.

The pilot was able to exit the aircraft without major injuries and the cause of the crash is unknown, though the incident is under investigation, said Anchorage, Alaska-based Joint Base Elmendorf-Richardson Base. The aircraft is assigned to the base's 3rd Wing. The F-22A was in Nevada for mock dogfighting against fighter aircraft in the Navy Strike Fighter Tactics Instructor program, also called Top Gun.

Posts to Facebook page “Air Force Forum,” which is not officially associated with the US Air Force, said that the aircraft suffered from a left engine flameout while the plane was taking off and raising its landing gear, though those claims have not been independently verified.

"The cause of the incident is still under investigation and it is not known at this time whether a landing gear, engine malfunction, or any other mechanical issue were factors in the incident," said Joint Base Elmendorf. 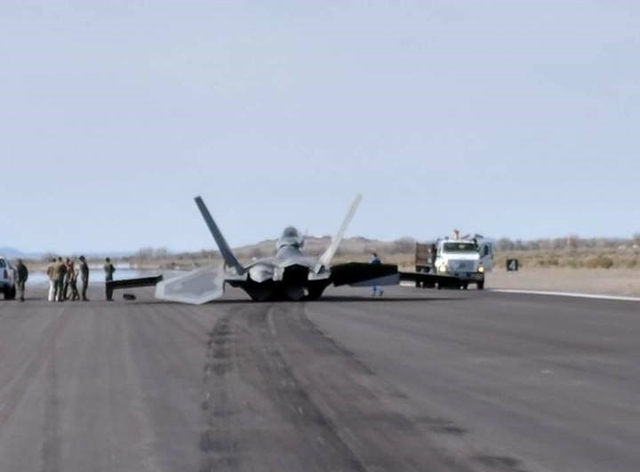 News of the mishap was first reported by The War Zone.

The crash at NAS Fallon comes after the USAF recently, in December 2017, returned to service an F-22A Raptor damaged six years ago. That aircraft skidded across the runway of Tyndall AFB, Florida in 2012 when a trainee attempted a touch-and-go landing, but mistakenly retracted the landing gear before pushing the throttle to military power. In addition to repairing scratches to the skins of the wing and the stabilator, the USAF replaced the skins and doors of the central and aft fuselage of that aircraft at a cost of about $35 million.