Start-up supersonic aircraft developer Boom Aerospace has revealed a new design for its XB-1 demonstrator, as well as a new first-class seating product for a follow-on, 45-seat airliner with a two-class cabin.

Since launching the concept more than a year ago, Boom has collected commitments for 76 aircraft from five airlines, including 51 orders added for the $200 million, Mach2.2 jet added at the Paris air show, says chief executive Blake Scholl.

The commitments are now reserved with deposits of "significant amounts of cash", Scholl says.

Virgin Group remains the only airline publicly identified as a Boom customer, with a commitment to purchase 10 aircraft, Scholl says. 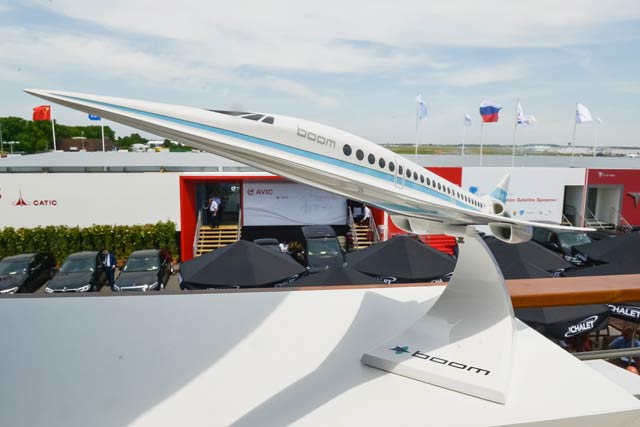 The commitments are accumulating despite the programme's preliminary status. Entry into service of the first passenger-carrying aircraft is scheduled in 2023.

The design review led to major changes, including the addition of a third air inlet for the GE Aviation J85 turbojet mounted on the top of the aft fuselage. The designers also altered the planform of the supersonic delta wing.

With more than $40 million raised so far, the XB-1 is financed to enter final assembly later this year and achieve first flight in late 2018, Scholl says.

For such missions, the Boom airliner will be offered to customers with more than a business-class-only cabin. The aircraft also could be outfitted with a two-class layout featuring 30 lie-flat, first-class seats and 15 business-class seats, he says.