Airbus is to increase the maximum take-off weight of the A380 as part of a package of enhancements to the aircraft, which it will collectively brand as the 'A380plus'.

The airframer has disclosed the improved performance during the Paris air show.

Increasing the take-off weight to 578t, a rise of 3t, will enable the current version of the aircraft to extend its range by 300nm. The type has previously been available in 13 weight variants, with take-off weights ranging from 480t to 575t.

The A380plus – which is still formally a development study – will also feature winglets which will provide up to 4% reduction in fuel-burn. 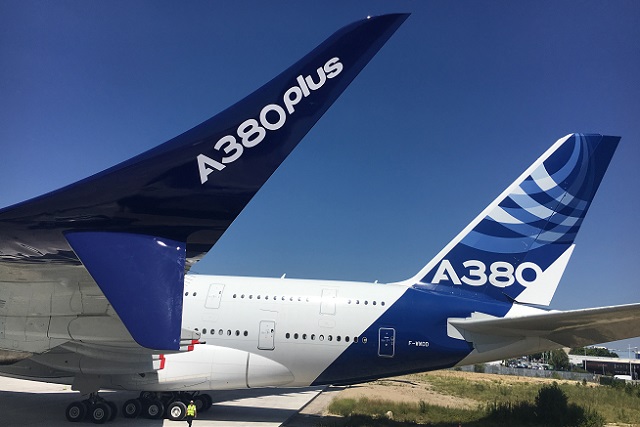 Airbus says the A380plus will include previously-disclosed measures to raise accommodation by 80 seats at the A380's current range of 8,200nm.

The manufacturer expects the enhanced aircraft to cut cost-per-seat by 13% against its predecessor.

“It is a new step for our iconic aircraft to best serve worldwide fast-growing traffic and the evolving needs of the A380 customers," says chief operating officer for customers John Leahy, adding that the A380plus will have lower maintenance costs.

Airbus has previously shown off incremental upgrades to the A380 which will become part of the A380plus.

These include modified interior arrangements including higher-density seating, modified forward and aft staircases, a relocated crew rest, and changes to sidewall stowage.