As an incumbent supplier to an aircraft programme, there is always the risk that your airframer customer will instead consider one of your rivals for the position, or, as has increasingly been seen – opt to take that capability in house.

Although not alone in this respect, Airbus last year announced that it would develop in house a nacelle for the Pratt & Whitney PW1100G engines powering certain A320neo-family jets, rather than rely on current sole supplier Collins Aerospace.

In addition, Airbus considered a similar strategy for CFM International Leap-1A-equipped versions of the narrowbody, planning to in-source a capability presently supplied by Safran Nacelles.

But Cedric Goubet, Safran Nacelles chief executive, tells FlightGlobal that the manufacturer convinced Airbus of its ability "to keep meeting their needs… and objectives". Its message was that it was "the right company to support them in the nacelle business", he says.

Cirium's Fleets Analzyer shows that customers have selected the Leap-1A for 37% of the 5,676 on-order A320neo-family jets in the airframer's backlog. P&W has won a 26% share, with no engine selection made on the remainder.

However, both Airbus and Boeing have taken steps to build up their own nacelle engineering capabilities as part of wider efforts to bring in house equipment from external suppliers.

Separately from the PW1100G nacelle in-sourcing programme, Airbus and Rolls-Royce disclosed in 2018 an agreement to co-operate on the development of a nacelle and pylon for flight tests of the UK propulsion specialist's UltraFan engine.

R-R has also conducted ground tests on an experimental nacelle featuring a shortened inlet with Boeing.

And previously, the US airframer in-sourced nacelle design for the 777X and certain design and assembly tasks for the 737 Max nacelle.

While there have been issues elsewhere in the A320neo's supply chain, the ramp-up of nacelles for the Leap-1A has gone "rather well" so far, says Goubet.

Annual deliveries doubled last year, to 400, and are set to reach 600 units in 2019. During the Paris air show, Safran Nacelles will celebrate the 1,000th delivery. 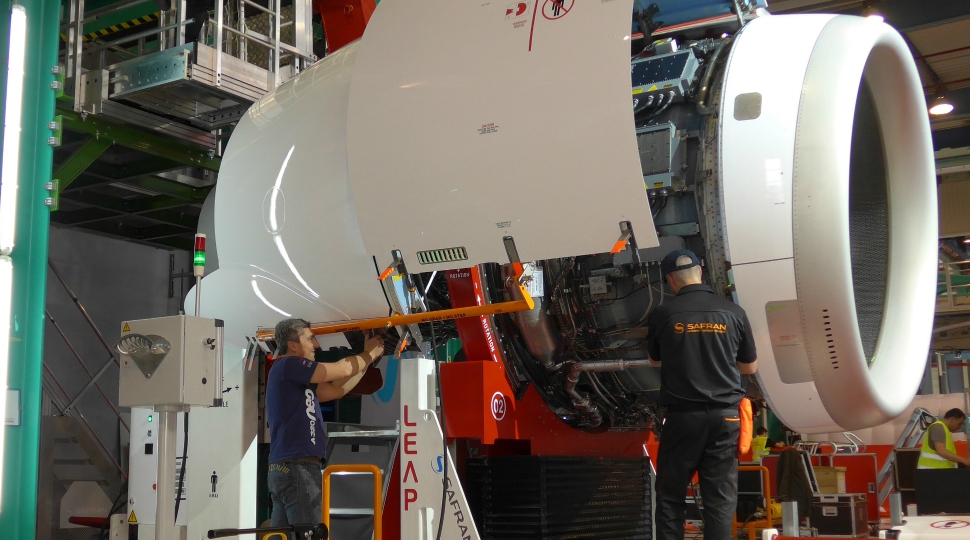 Unlike the engine manufacturers – which have repeatedly highlighted supply-chain bottlenecks for castings and forgings as a concern over potential further production increases – Goubet does not foresee "any roadblocks" to a potential rise of nacelle output beyond the airframers' current ramp-up targets.

Airbus said in April that it was on track to reach monthly production of 60 A320-family aircraft by the middle of this year, rising to 63 in 2020, with studies under way to see if the supply chain could support rates of 70 or above.

In 2018, Boeing achieved monthly production of 52 737s, and prior to the Max grounding, had planned to increase output to 57 units this year.

Among Safran Nacelles' product line is the nacelle for the Rolls-Royce Trent 7000, the sole powerplant available for the A330neo.

Goubet acknowledges initial quality production shortcomings – which he describes as "absolutely normal teething issues" for a new nacelle – and says the programme is "gathering speed".

He declines, however, to disclose specific targets for the ramp-up. Fleets Analyzer shows that 11 A330-900s have been delivered since the type entered service in late 2018.

Elsewhere, Goubet says it is "too soon to tell" what impact the acquisition of its US partner Middle River Aircraft Systems might have on their Nexcelle venture.

The Safran Nacelles-MRAS venture was established with the objective of optimising the interaction of an engine and nacelle as an integrated propulsion system.

Today, Nexcelle produces the nacelles for the CFM Leap-1C – an option on the in-development Comac C919 – and for GE's Passport engine that powers Bombardier's Global 7500 business jet.

"We do not have the same track record [and] history with the new [MRAS] owner," Goubet says – adding: "We will have to learn to work with this new partner."

He argues, however, that ST Engineering's experience, especially as an MRO provider, represents an opportunity for Safran Nacelles to boost its aftermarket business.

Noting support requirements for the A320neo fleet, he says: "We have a lot on our plate."

The manufacturer is in the process of establishing repair facilities in China and Southeast Asia. "We need partners to do that… We really look forward to further expand our joint business with ST Engineering," Goubet says.