Airbus has conducted the maiden flight of its A350-900ULR, the heavier and longer-range variant of the twinjet tailored to operate specialised long-haul routes.

The initial aircraft, MSN216, departed the airframer's Toulouse headquarters at around 10:45 on 23 April. 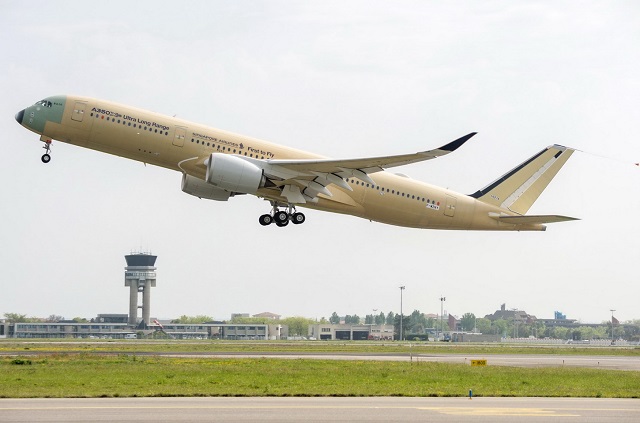 It features three primary modification aspects, of which two will be applied to all new-build A350-900s.

Airbus has hiked the maximum take-off weight to 280t, an increase on the previous figure of 275t. It has also incorporated a series of aerodynamic changes which, it says, will contribute to a 1% fuel-burn saving.

These include a further slight twist of the wing, a taller winglet, trailing-edge extension and clean-up of the upper wing fairing. All these adaptations will become standard on the -900.

"The importance of the modification is the increase of payload-range – it's up to the airline whether it wants range or payload," head of A350 marketing Marisa Lucas-Ugena tells FlightGlobal.

She says the higher-weight variant will need to be certificated but expects this to take only "a few weeks".

The ultra-long-range -900ULR will have dedicated changes, primarily a higher fuel capacity. The centre wing tank will not be increased in size but replumbing of interior installations will provide access to another 24,000 litres of existing volume.

"They're just minor changes to a few pipes," says Lucas-Ugena.

It is set to take delivery of the first -900ULR this year, although Airbus declines to narrow the handover window beyond a second-half timeframe.

The aircraft will be capable of operating with a duration of 20h and Singapore Airlines intends to use it for a nonstop service to New York – the Rolls-Royce Trent-powered twinjet's test registration, F-WZNY, appears to allude to the US city.

Airbus aircraft interiors marketing director Florent Petteni tells FlightGlobal that the A350 cabin was designed with ultra-long-haul considerations from the outset.

"Everything is made to have a comfortable long-haul flight," he says, pointing out such features as the "fully dark" cabin to help passengers to sleep. He says this is "very important" for -900ULR operations.

"When you work in a loud environment it makes it very tiring for the cabin crew and passengers," he adds, stressing that the noise level of the A350 is "very low".