PICTURES: Second BelugaXL will be first into service

Conversion work has commenced on the second BelugaXL – MSN1853 – which will be the first of the type to be delivered for operational service next year, while the first, MSN1824, is having the first of its two Rolls-Royce Trent 700 engines fitted.

Airbus is intending to construct five of the A330-based XLs. The aircraft is a hybrid for centre-of-gravity considerations, its forward section based on the A330-200 and the aft on the A330-300, with the reinforced floor and structure of the -200 freighter.

The airframer intends to deliver two initial aircraft to ATI, the Airbus Beluga fleet operator, in 2019, then one per year from 2020.

All five A300-600STs will remain in service until three XLs have been delivered – taking the Beluga fleet to eight – before Airbus begins to withdraw them from 2021. Airbus aims to have all five XLs in service by mid-2022. The future for the A300-600STs has yet to be determined.

MSN1824 is the first flight-test BelugaXL and will conduct the maiden sortie this summer. This aircraft achieved power-on at the end of last year, and is due to move to a fuel- and ground-testing station over the next two weeks. George says landing-gear and flight-control system checks have already been performed.

"Both were successful," he said, speaking at the airframer's Toulouse plant on 20 March. 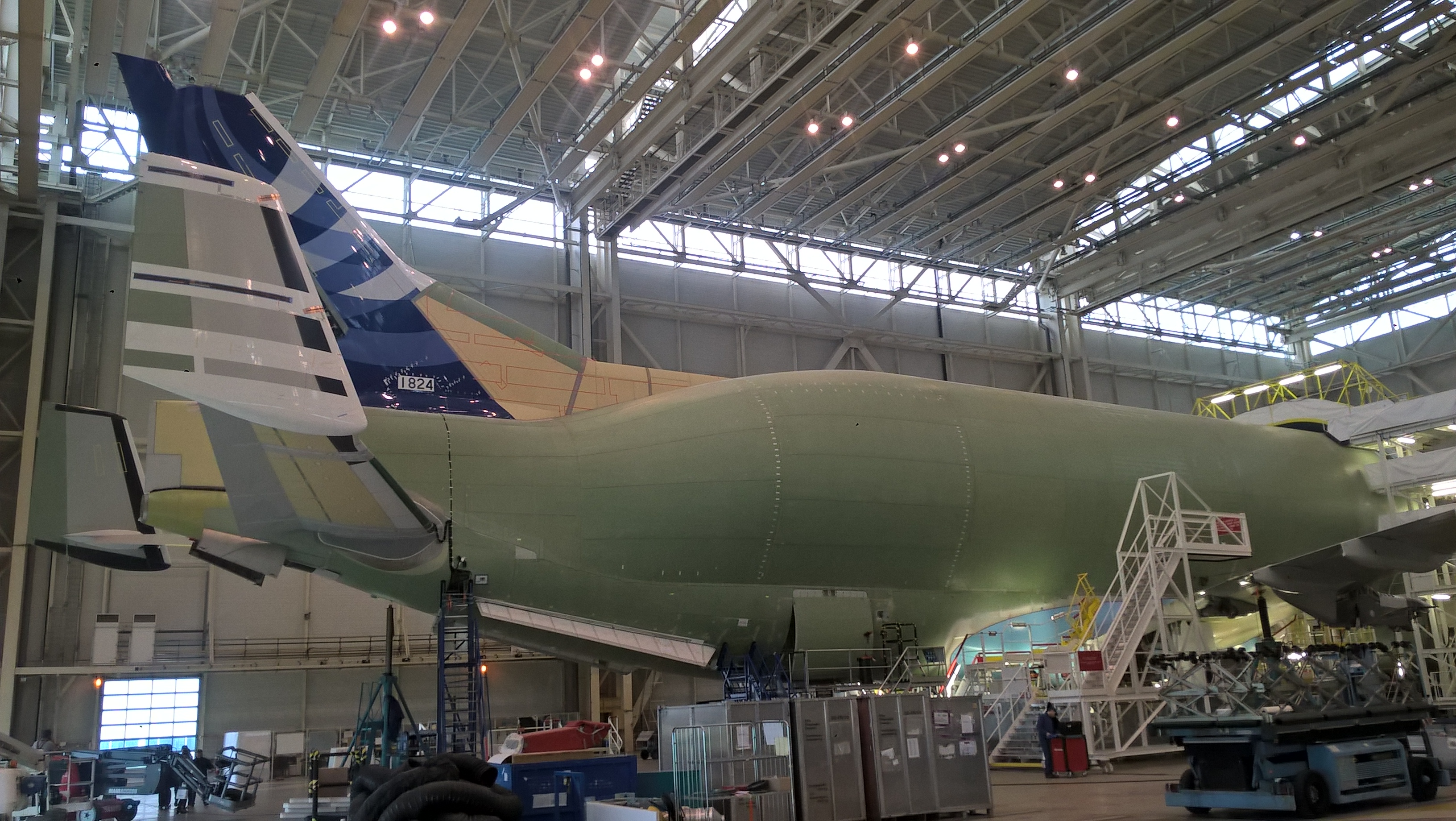 Airbus uses the Beluga fleet at 11 stations in Europe and the second XL will perform proving work, visiting the main centres to demonstrate that it is ready for operation. It will enter service first, while the flight-test aircraft undergoes retrofit to remove flight instrumentation.

Around 30% of the conversion work on the second aircraft has been carried out at the modification centre, building L34 at Toulouse plant. Both MSN1824 and MSN1853 are squeezed inside, their wingspans overlapping, the space so limited that winglets cannot be fitted until the aircraft are ready to be moved for painting.

Airbus previously used L34 for A350 and A380 static testing, and George says: "It will be the first time in this place that we'll create aircraft rather than destroy them."

The third XL will enter the conversion station before the end of this year.

Creation of the XL begins with a semi-built platform which comprises the central and aft fuselage, wings and main landing-gear of the A330. This platform arrives "almost without systems", says George, with certain upstream installations removed.

The aft upper fuselage is absent and the upper central fuselage is cut off as part of the preparation for conversion. George says the metal fuselage is "better adapted to transformation". 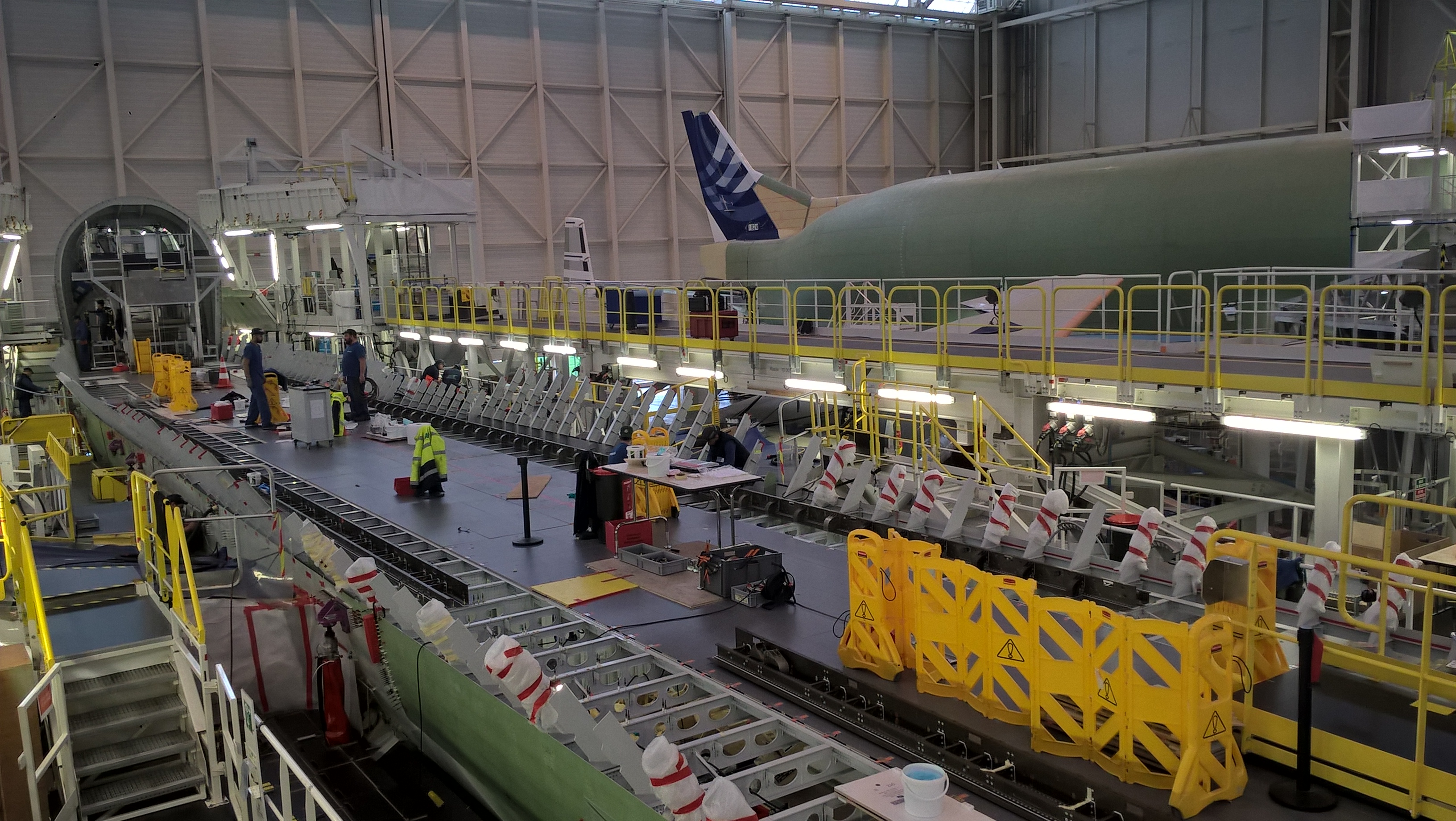 Once the upper fuselage has been cut away, three months and some 8,000 new parts are needed to prepare the junction line on which the enlarged freight hold will be mounted. The hold has a payload capability of 51t, up from the 47t of the -600ST.

The XL hold, which is unpressurised, is constructed from the rear, beginning with installation of an adapted tail section from Spain's Aernnova before progressively building up the upper fuselage by fitting two side panels and a crown to complete each section.

Stelia Aerospace produces the nose section, including the cockpit, which is mated with the A330 platform. Airbus supplies a four-seat courier section which, along with two pilots and a jump-seat, increases the accommodation of the XL to seven personnel. The -600ST could carry five: two pilots and three individuals on jump-seats.

The XL is 6m longer, 1m wider and 0.5m taller than its predecessor, and it will have a much longer range – some 2,300nm compared with the -600ST's 900nm – although George points out that it is unlikely to be used outside of its European network. Airbus has sought savings to reduce the investment required for the XL, he says, such as elimination of the need for extended twin-engined operations (ETOPS) capability.

"We had very challenging targets to achieve, so that it cost a minimum to us," he adds, although he declines to specify the cost of the XL programme.

Like the -600ST the XL has a modified horizontal stabiliser, with auxiliary fins, while its integrated main vertical fin has been enlarged by 50%. Stability is further enhanced with the installation of two ventral fins beneath the empennage. The aircraft will be able to operate at 35,000ft with a speed of M0.69, a performance similar to that of the -600ST.

Its main freight door, also built by Stelia, has 24 latches. The XL's hold has a maximum diameter of 8.8m and the infrastructure preparations at Airbus facilities include adapting loading-bay doors to accommodate both the -600ST fuselage and that of the XL.

Airbus's UK plant at Broughton has upgraded its Beluga docking station and the runway is also being resurfaced.

He says the XL is required because the -600ST is not large enough to transport two A350 wings simultaneously. Bringing an A350 to the final assembly line takes nine times the number of -600ST flight hours as those required for an A320, compared with treble the number for an A330.

Introduction of the XL will support the development forecasts for Airbus's major programmes, particularly the A350-900 and -1000 as well as the A330neo.

While the A330neo could conceivably have served as the foundation for the BelugaXL, the demand timeline for the new transporter was too far ahead of the A330neo development programme. George also points out that the baseline A330 has a "proven track record" of "maturity and robustness".