US firm Pexco Aerospace is expecting to achieve FAA certification by July of a cabin fitting aimed at reducing shared air between passengers.

Pexco, which acquired the AirShield technology from Seattle-based design firm Teague, says it will offer “virtual social distance” as face-masks mandates are phased out.

President Jon Page states that the system will provide passengers with a “premium and personalised” experience.

The system is installed over the top of passenger air vents in the cabin and works in co-operation with HEPA filters.

Pexco says the AirShield redirects purified air around and between passengers to establish “protective air barriers”.

“These create uniform airflow throughout the cabin, minimising the sharing of exhaled air and increasing the rate at which spent air is removed,” says Pexco. 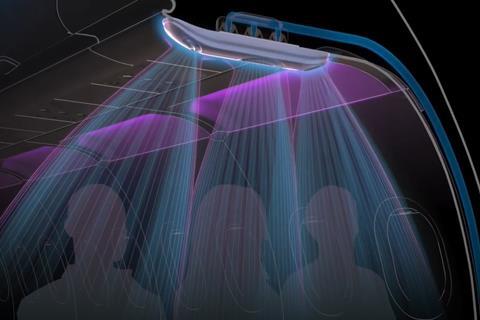 Computations fluid dynamics analysis and tests on board Airbus A320s and Boeing 737s have shown the development reduces the spread of airborne particles, the company claims, cutting the quantity of shared air particles between neighbouring passengers by 76%.

The tests assumed the aircraft were full-occupied and none of the passengers was wearing a mask.

Pexco also says the system doubles the rate at which particles are expelled from the cabin and replaced by freshly-purified air. AirShield “reshapes” airflow from the vents, it adds, but does not alter the temperature of the cabin or the volume of air supplied.