Boeing and electric-drive specialist Chorus Motors are in “active discussions” over possible follow-on work on a powered nose-wheel system for airliners following a successful series of tests on a proof-of-concept motor on a 767.

The ultimate plan would be to develop a fully integrated electric-drive system to allow aircraft to move around the airport without using their engines or tow tugs. The result, say the developers, would be more energy efficiency, increased engine life and reductions in maintenance costs and harmful environmental emissions. 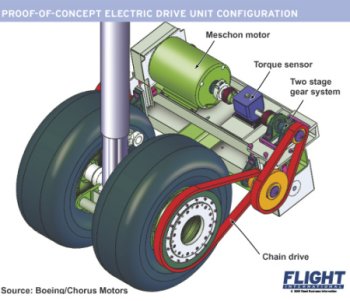 “Overall, the results were extremely encouraging,” says Chorus Motors aerospace applications programme manager Robert Carman. Future challenges include making a “weight neutral” system, packaging within the existing nose wheel gear envelope, system integration and ensuring flight-critical levels of reliability. The tests were conducted in co-operation with Air Canada which supplied a 767-200 and crew. The pilots performed ground manoeuvres on slopes and terrains “typical of those at airports around the world”, says Boeing Phantom Works, which led the effort with Chorus. Evaluations included reversing away from a gate and taxiing forward to a runway. Tests also were performed at ramp temperatures exceeding 49˚C (120˚F) and at loads of up to 94% of the maximum take-off weight of the aircraft.

“We were in the neighbourhood of 300,000lb [136,200kg],” says Carman. “Up until now the technology has been lacking because no-one has been able to produce this sort of power density,” he adds. The Chorus-Boeing developed nose-wheel power device is based on a concept called the Meschon system.