The US Army has put Textron Systems on contract to update all but two of its RQ-7 Shadows to the all-digital Version 2 system, and a deal for those remaining aircraft operated by the National Guard should be forthcoming later this year, says the manufacturer’s vice-president of tactical unmanned aircraft systems.

Henry Finneral told Flightglobal at AUVSI’s Xponential conference in New Orleans that of the 117 Version 1 aircraft delivered to the army and US Marine Corps, the $116 million contract announced by the US government this week brings the number of on-contract V2 conversions to 115.

Finneral says the V2 aircraft brings forward, among many updates, a wide-bandwidth communications capability that enables the use of a high-definition electro-optical/infrared full-motion video sensor, and the first operational units equipped with the high-fidelity system will deploy to the US Central Command area of responsibility later this month. The next planned improvement comes in the form of a weather-proofing kit, which will bolster the Shadow’s performance in rainy, humid environments.

Beyond that, Finneral says Textron is working with the army’s programme office to “figure out what’s next” as a major Block III re-engining effort creeps up on the horizon. “The V2 will be operation out through 2036 right now,” he notes.

Lt Col Tory Burgess, the army’s Shadow unmanned aircraft system product manager, said at the conference on 3 May that the plan is to procure 200 engines to retrofit all RQ-4B V2 aircraft.

That programme is the next biggest opportunity to beef up the Shadow’s capabilities by giving it more power and reliability than afforded with the current engine, built by UAV Engines.

Burgess says airworthiness and reliability testing of potential Block III engine solutions will wrap up at the end of fiscal year, in October, and procurement funding has been requested in the service's FY2017 budget to proceed with a “full and open competition” and begin production. The first new engines should be ready for fielding in 2018.

Burgess says the current engine was fine back when the Shadow weighed 127-141kg (280-310lbs), but Shadow now typically weighs more than 204kg because new equipment and sensors have been added.

“The current engine just doesn’t have the legs we need it to have,” he says. “[The Block III engine] will provide a huge capability leap for the Shadow air vehicle.” 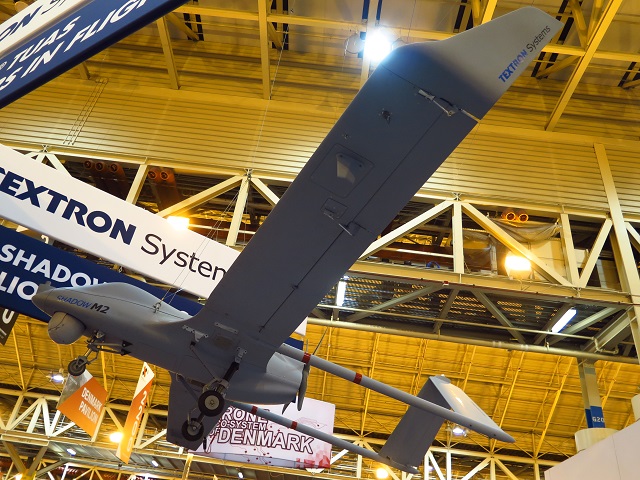 Finneral sees the re-engining effort as a potential opportunity to introduce the company’s self-developed Shadow M2 airframe that it has been promoting domestically and around the world – most recently submitting a proposal to the United Arab Emirates. Shifting to the M2 would add 6h of endurance and 45kg of payload capacity.

“We see that spiralling into the army’s plans,” he says. Textron has built five Shadow M2s and clocked up more than 300h of flight testing.