New Zealand helicopter firm TGR Helicorp plans next month to start operational testing of a prototype high-altitude vertical take off and landing (VTOL) UAV optimised for use as an air ambulance as part of plans to provide rescue services for climbers on Mount Everest from 2008.

The Alpine Wasp UAV design is a derivative of TGR Aerospace’s SNARK unmanned combat air rotorcraft design, but with key modifications including an advanced rotor head and rotor blades optimised for high altitude operation. The existing SNARK design uses a DeltaHawk Engines 240hp (179kW) DeltaHawk powerplant which would be run on J-A1 jet fuel rather than diesel to resolve fuel gelling problems in extremes of cold. 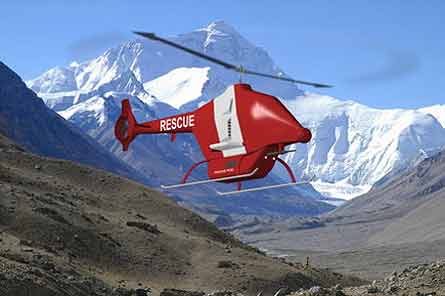 Artists impression of the Alpine Wasp at the base of Mount Everest. Everest Rescue Trust artwork

Air vehicle control would be achieved through the use of a five-camera sensor suite mounted in the UAV nose, with the images datalinked in real time to a virtual piloting station.

The testing campaign will be carried out in the mountains of New Zealand’s South Island and run until September. The UAV will be deployed to Nepal in December and commence in-country testing in March 2008, followed by fee-for-service rescue operations from April 2008.

TGR says the UAV will be capable of fully autonomous operations at altitudes of more than 30,000 feet however it is unclear whether this is in-ground effect or out-of-ground effect. The UAV would be capable of carrying two sick or injured climbers.

The rescue service would be operated by a group known as The Everest Rescue Trust established by TGR last year. The trust proposes establishment of an operations centre at the Nepalese village of Namche Bazar, located some 35km (21mi) from Everest itself. It also says that negotiations with Nepalese authorities are expected to recommence next month as plans are finalised.

In a statement TGR president Trevor Rogers says: “Through innovation, design and cutting edge technology we’re going to challenge the science of aviation at extreme altitude and conquer new frontiers on Mt Everest and in Nepal.

“We hope that the success of this project will increase the Trust’s capability to help other people all over the world. The potential for pushing the boundaries of long range, high altitude rescue is unlimited, it could change the course of modern alpine aviation history.”