Thales estimates that over 12,000 aircraft will be fitted with in-flight connectivity equipment in the next decade, and that L-band satellite-based solutions will dominate the market.

The in-flight entertainment manufacturer, which is now offering a suite of connectivity solutions to airlines and business jet operators, values the 10-year market for connectivity systems at about $2 billion.

L-band systems, such as those supported by Inmarsat's SwiftBroadband (SBB) aeronautical service, will account for about 59% of the market, according to Thales, whose own connectivity strategy centres on SBB.

"We want to be a complete systems provider. That means [offering] cockpit and cabin connectivity in a single solution," he says, noting that Thales provides a scalable solution "that covers high-end business jets to the largest widebody".

Thales, which competes with Panasonic in the IFE space, has traditionally worked with in-flight connectivity service provider OnAir, an Airbus/SITA partnership. However, the firm is open to working with other service providers, including AeroMobile.

"If the airlines want to support other service providers, we'll accommodate that," says Pellegrini.

Thales further estimates that about 25% of the connectivity market over the next 10 years will constitute Ku-band and Ka-band-based systems. 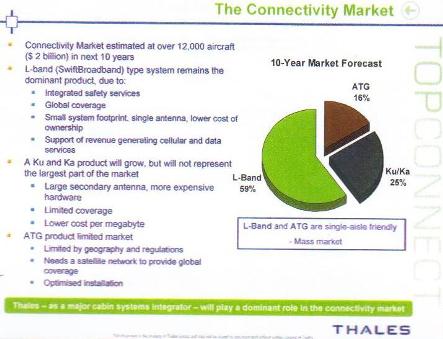 Ku forms the basis of in-flight connectivity solutions on offer from Panasonic and Row 44, which have each won high-profile customers.

But Inmarsat believes the business model for Ku-based solutions has not changed significantly since Connexion by Boeing went out of business at the end of 2006.

While Thales is "not closing the book" on Ku-band systems, it believes Ka will provide a better answer. Pellegrini says Ka could augment Thales' SBB-based offering in the coming years, as needs grow for greater bandwidth to the cabin.

The remaining 16% of the connectivity market in Thales' 10-year forecast represents the "limited market" for air-to-ground (ATG)-based services, such as Aircell's domestic offering in the USA, says the firm.