The best-selling 737 is a true record breaker, but surprisingly struggled for life in its early years. Boeing even once offered to sell it to the Japanese

The list of trivia about the Boeing 737 is inversely proportional to the size of this relatively small, but immensely successful jet airliner. With more than 6,100 on order and over 4,100 in service worldwide, it should not be surprising, for example, that on average more than 1,250 737s are in the air at any one time. In the 5min it takes to read this feature, more than 65 737s will have landed and taken off. 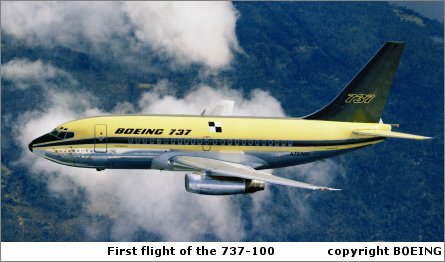 Around 541 operators fly 737s into 1,200 cities in 190 countries and territories. More than 12 billion passengers have flown on the 737 fleet, which, since entering service in 1968, has accumulated more than 120 billion kilometres (65 billion nautical miles). The 737 fleet has racked up more than 296 million hours of revenue service – roughly the same as almost 33,790 years of continuous service. Of the more than 16,200 Boeing/Douglas commercial jets ordered, just over 33% have been 737 family members and the 737 represents more than 25% of the worldwide fleet of large commercial jet airliners.

No previous jet airliner family has been so widely developed. Forty years after Boeing began construction of the prototype 737, it is preparing to start assembly of the first -900ER, the 12th major passenger variant, not including several key military derivatives. Records are broken regularly: 2005 saw the 737 attract net orders for 569 aircraft, more than double 2004’s tally and the first time more than 500 orders have been placed for any Boeing commercial jet airliner in a single year.

Yet for many years the 737 teetered on the brink, with Boeing at one stage even considering selling or cancelling the programme. Faced with fast-growing competition in the short-haul jet market in the late 1950s and early 1960s, Boeing launched into the full design of the 737 in November 1964. Aimed initially at a requirement for an 85-seater with a 925km range and outstanding short-field capability, the first concepts closely resembled the T-tail designs of arch-rivals the BAC One-Eleven and Douglas DC-9 – both, in turn, having been similarly inspired by the Sud-Aviation Caravelle.

Joe Sutter, later the chief designer of the 747, co-led the fledgling 737 project along with legendary Boeing designer Jack Steiner. Sutter recalls: “Douglas sort of accepted tail-engined configurations as a way of producing the best design for smaller jetliners and came up with the DC-9. We laid out our design and ended up with a sort of DC-9 ourselves.” From its own 727 development work, and from lessons being learned elsewhere, Boeing knew that T-tail designs were prone to deep, sometimes unrecoverable stalls. “Deep stall was a consideration. I went to my office and took out a three-view drawing and cut the engines out and started putting them in different locations. I felt we could put the [engine] barrel under the wing and get the turbine out behind the rear spar,” says Sutter.

The wisdom of the decision was reinforced by the width of the 707-derived fuselage. “We had a wider cross-section, compared with the DC-9, and if we’d put engines on the back end of that fuselage, the aerodynamic effects would have been horrendous,” says Sutter. To provide adequate ground clearance, the engines had to be mated directly to the underside of the wing, rather then being suspended on pylons or struts. To achieve this, Boeing borrowed from the design of the outboard engine mounting of its own B-47 Stratojet, although the attempt to adopt a low-drag “stream-tube” nacelle concept from the bomber proved impractical.

The design of the wing was also a critical aspect. “It had only modest sweep [25° at quarter chord] and was built for excellent take-off and landing performance. We placed huge emphasis on that,” says Sutter. The main wing spars, set at 6° dihedral from the root, were also canted further upwards outboard of the engine mount.

In an interview several years before his death in 2003, Steiner recalled the dihedral decision was a key design feature that paid major dividends later. “It’s the first Boeing aeroplane to have both spars cranked, and it gave us a fuel capacity that is still favouring the aeroplane. I doubt that the aeroplane would be as successful as the new ones are today if we didn’t have that added fuel capacity. We’ve got a lot of fuel capacity in that bird for the span.”

Boeing believed it could benefit from the bending-moment relief of the underslung installation and design a slightly lighter wing. Structural tests proved the weight saving was over-estimated, however, when the wing failed at 95% of design limit load. The wing was redesigned and strengthened as a result, inevitably adding weight. Despite this, the overall airframe was still more than 700kg (1,550lb) lighter than alternative tail-mounted concepts of identical size, as a result of the wing-mounted engine configuration, and could seat up to six additional passengers.

Lufthansa persuaded Boeing to stretch the cabin slightly to accommodate up to 100 passengers and, as a result, launched the 737-100 in February 1965 with an order for 22 aircraft. United Airlines asked for even more capacity and Boeing obliged with the 130-passenger 737-200. Business for the -200 version quickly began coming in and by the time the first of the original 737-100 batch was delivered to Lufthansa in December 1967, Boeing had orders for 185 737s from 19 airlines in 10 countries.

Despite the optimistic start, the 737 was quickly in trouble. The programme struggled for engineering and financial resources against the massive investments then being poured into the newly launched 747, and by 1970 the company seriously considered selling the 737 programme to the Japanese aerospace industry to raise much-needed funds. “We offered the whole caboodle to the Japanese. We were dead serious about trying to get money from anything. I can’t tell you that we would have gone through with it, but the intention was there. We were broke,” said Steiner, who added the prospective sale “has never really been talked about”.

The sale was technically feasible because of the unusual portable production jigs developed for the 737. The original site of the production line was at Boeing Field, and it was moved to its current site at Renton in late 1970. “It’s the only movable wing tooling Boeing has ever had, as far as I know,” said Steiner. “It was made movable so we could take the whole thing to Wichita [where 737 fuselages are still made by Spirit AeroSystems]. Later I had the job of bringing it from its station south of Plant 2 [at Boeing Field] over to Renton.”

By 1973 the world was in the throes of its first oil crisis, with orders so low that Boeing set up a task force to examine whether the 737 line should be shut down. Only 14 new orders came in 1972, while deliveries slumped from 114 in 1969 to just 22 in 1972 and 23 in 1973. Thankfully for Boeing, the ensuing market recovery and development of the 737-200 Advanced led to a resurgence in demand and the crisis was past.

Advances in engines and avionics technology through the 1970s and the emergence of the Joint European Transport study into a future 130-190-seater – which later morphed into the Airbus A320), – moved Boeing towards studies of new developments in the 100- to 150-seat short-to-medium range market. In 1981 the company formally launched the CFM International CFM56-powered 737-300 on the back of orders from Southwest Airlines and USAir. The reborn aircraft was slightly larger, and would be the basis for not just one, but two subsequent new generations of 737s. The rest, as they say, is history.