The UK Parliament has voted in favour of the Royal Air Force participating in the air strike campaign against Islamic State (IS) militants in Iraq.

The UK will now contribute to the action, joining the USA, France and five Arab nations that have already carried out air strikes against Islamic extremists advancing in the region, following a vote in the House of Commons on 26 September. The MPs voted 524 in favour and 43 against the motion.

Parliament was recalled to debate the issue, with both Prime Minister David Cameron and Labour opposition leader Ed Miliband voicing their support for the proposition, and other MPs offering their opinions and concerns of intervening in this way.

The UK has concluded that there are legal and moral grounds for intervening offensively in Iraq, based on an official request from the nation's prime minister, Haider al-Abadi, who leads a government the UK considers democratic and balanced.

The UK deployed Panavia Tornado GR4 fighters to RAF Akrotiri in Cyprus in August, and has been carrying out surveillance missions in support of air strikes conducted by the USA since 8 August, and more recently by France. The aircraft could be re-tasked to conduct air strikes if necessary, and the Tornado can be – and has been – integrated with the MBDA Brimstone missile.

In his opening remarks, Cameron touted the “unique military assets” the UK possesses, in particular the Brimstone missiles, which the USA does not have in its arsenal. 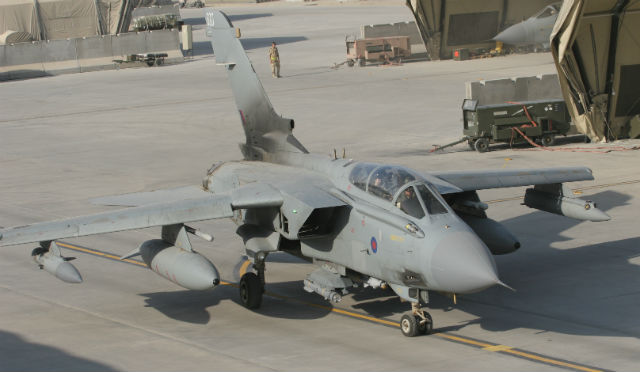 The UK military is also familiar with joint operations with its US counterparts – any UK air strikes are likely to come under the control of US Central Command – and has capable intelligence, surveillance and reconnaissance assets.

Opposition leader Miliband says military action must always be a last resort, and that “this criterion has been met”.

However, he was quick to avoid parallels being drawn with the Labour-led decision to invade Iraq in 2003, noting that this action would be in support of a democratic government.

Cameron claims the UK’s participation would not extend into Syria due to political tensions between the West and the Assad regime.

However, during the debate some MPs claimed UK actions extending into Syria would be inevitable, adding that UK forces and their families are based out of Akrotiri, which is some few hundred miles from the Syrian border.

Denmark also announced on 26 September that it would deploy seven Lockheed Martin F-16s in support of the coalition effort.