The existing operational fleet of General Atomics Aeronautical Systems Predator B unmanned air vehicles (UAV), also called the MQ-9 Reaper, in March reached a cumulative one million flight hours, the majority of which were in combat.

The Reaper met that million-flight-hour mark by flying 78,606 sorties since the aircraft’s maiden flight on 2 February, 2001, from the company’s Gray Butte flight operations facility in Palmdale, California.

The aircraft are flown more than 700 hours per day bythe US air force, US Department of Homeland Security, NASA, and the Italian, UK and French air forces. 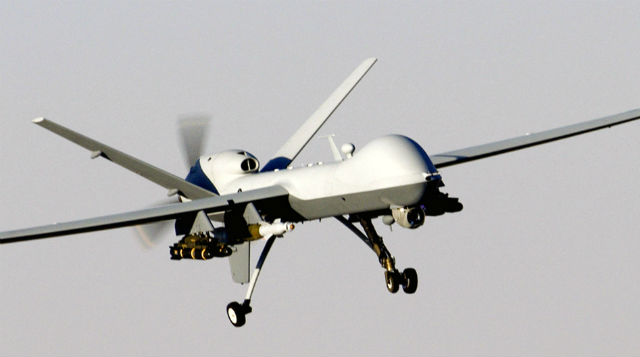 General Atomics has delivered at least 230 MQ-9s to its various operators. The US air force by far has the largest operational fleet, most of which support operations in Afghanistan and previously in Iraq, where they are again flying in support of the coalition fight against Islamic State militants.

Three of the aircraft roll of the assembly line each month and the company says it has capacity to double that production rate if necessary.

The Reapers smaller, older cousin, the MQ-1 Predator, designated by the US army as the Gray Eagle, also achieved a record 500,000 flight hours in March. That accounts for the operational aircraft aloft for 1,370 hours daily.

General Atomics on 16 March was awarded a $132 million contract by the US army to purchase 19 Gray Eagles along with associated satellite communications air data terminals, spares and ground support equipment.

The US air force is transitioning from the MQ-1 to the larger, longer-range MQ-9. The service has no more orders for the MQ-1 and has essentially closed the Predator training school at Holloman AFB in New Mexico. By 2017, all new UAV pilot trainees and sensor operators will train to fly the MQ-9.

Resurgent US involvement in Middle East conflicts has increased demand for the MQ-1s currently in the US air force inventory. The service does not have funding to replace MQ-1s with MQ-9s, so the Predator continues to fulfill demand from US combat commanders for intelligence, surveillance and reconnaissance in the Middle East and elsewhere.