The US Army is counting on the Boeing AH-64 Apache attack helicopter to remain in service for the foreseeable future, which will require incremental upgrades beyond the most up-to-date E model aircraft that have already seen thousands of hours of combat.

All of the army’s AH-64Es should be out of Afghanistan by the end of the current fiscal year, after which time they will be reset for future missions, Col Jeff Hager, the service’s Apache project manager, told reporters on 13 October at the Association of the US Army’s annual exposition in Washington DC.

Boeing is supporting the army’s plan to upgrade all its Apaches to the E model, which along with previous iterations of the aircraft is set to take over the armed aerial scout mission as part of the service’s aviation restructuring initiative. Even as the fleet’s role in Afghanistan is lessened, Apaches recently started combat operations against Islamic State militants over Syria and Iraq.

The army earlier this year signed contracts for the third and fourth lots of E-model Apaches, which brings the programme to full-rate production. At least 30 of the total 82 aircraft in these lots have been built, Hager says. The lots will take the programme through FY2017 at least, when both Boeing and the army are aiming to sign a five-year procurement contract for 48 aircraft per year. 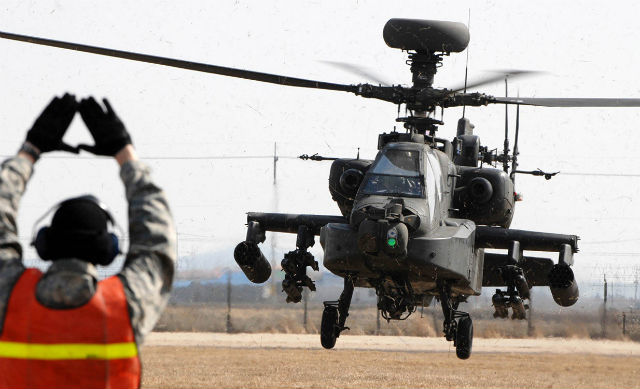 The combined D- and E-model fleet has flown more than 4 million total flight hours. Of this, 23,000h was with AH-64Es, which have flown almost 9,600 combat hours. E-model Apaches boast engine and transmission upgrades and composite main rotor blades that reduce weight while improving lift and power. The AH-64E also features a Link 16 communications suite that displays intelligence, surveillance and reconnaissance data captured by other aircraft directly into the Apache’s cockpit.

From April through to September, E-model Apaches were flying in combat with an 88% operational readiness rate, says Tim Sassenrath, Boeing's vice-president for rotorcraft support.

This is “a phenomenal feat for a new airframe in combat, flying the type of hours that Col Hager mentioned”, Sassenrath says.

Lot six aircraft will include new technology, such as the addition of a fire-control radar that broadens bandwidth to allow for detection of small ships in littoral environments, in support of increased maritime operations, Hager adds.

Expanded manned-unmanned teaming is also in the Apache’s future, Hager says. The AH-64E has Level 4 teaming with the AAI RQ-7 Shadow, giving Apache pilots complete control of the unmanned air system (UAS) from take-off to landing, and seamless access to its sensor data. The D-model has Level 2 teaming capability, where data is ported into the Apache cockpit but the pilots are unable to command the UAS.

“We have controlled all of the sensors on a Shadow B2,” Hager says.The army has already teamed up Apaches with the larger General Atomics Aeronautical Systems MQ-1C Gray Eagle.

Boeing is also producing AH-64Es for a number of Foreign Military Sales customers. Taiwan has taken delivery of all 30 aircraft it ordered. Saudi Arabia will eventually boast a fleet of 36 Apaches assigned to the Royal Saudi Land Forces and another 12 for its national guard, that will begin delivery in 2015. South Korea will take delivery of the first of its 36 aircraft next year.

India, Indonesia and Qatar all are interested in purchasing new Apaches as well, Hager says.

“Every country that has ever operated the Apache is coming back and asking for the latest improvements, what’s going on with the [E-model], because they are seeing the benefits it’s bringing to the US, and they want to be able to interoperate with that," he adds.