US Special Operations Command (SOCOM) will keep two borrowed North American Rockwell OV-10G+ Broncos until early next year, when the results of the recently completed Combat Dragon II evaluation are in.

What happens to the aircraft afterwards depends on the Department of Defense. “If DoD has no further interest in the OV-10s, then the aircraft will be de-militarised and given back to NASA,” says US Navy Lt Cmdr Li Cohen, a SOCOM spokesperson.

Cohen declines to say what other military uses the turboprops might have.

NASA loaned both aircraft to SOCOM to be modified for a light air support experiment, raising the possibility of reviving the venerable Vietnam-era platform for modern battlefields.

Drawing to a close on 30 September, the Combat Dragon II experiment tested whether the OV-10 could be used in counter-insurgency efforts in Afghanistan. The idea was to have kitted-up light aircraft support ground troops from quickly prepared airfields. 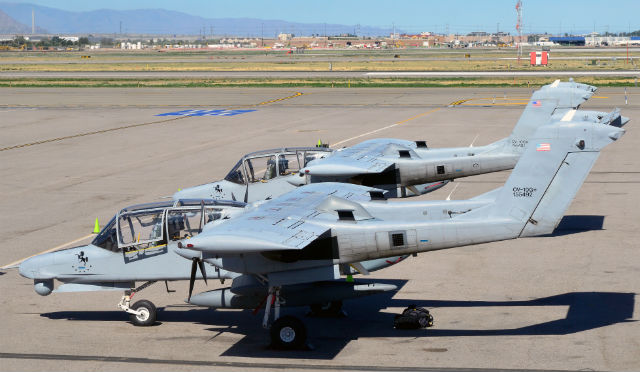 Initially, Combat Dragon II was supposed to be a four-aircraft, in-theatre evaluation, but the programme ran afoul of Congress, leading to a more modest test in the USA.

Citing the lack of a legal justification called a “joint urgent operational need” and the US Air Force’s ongoing upgrades of the Fairchild Republic A-10, Senator John McCain called Combat Dragon II a “duplicative close air support programme without any clear, defined requirement.”

The USAF and US Marine Corps acquired 157 OV-10A Broncos between 1966 and 1969 to perform light observation and forward air controller duties in Vietnam, according to a military fact sheet. The USMC deactivated the last OV-10 unit in 1994, leaving the only operational aircraft in the hands of NASA, the State Department and the air forces of Colombia, the Philippines and Venezuela.