Northrop Grumman has received an additional $63 million from the US Navy to carry out “post-demonstration” development of its X-47B carrier-based unmanned air vehicle.

Announced on 26 June, the contract – dubbed Phase II – will see continued development of the test vehicle created under the navy’s unmanned combat air system – demonstration (UCAS-D) programme. The newly-contracted work is expected to continue until March 2015.

“These activities include continued X-47B aircraft systems, testbed and flight test support at both shore-based locations and associated carrier detachments,” the navy says. 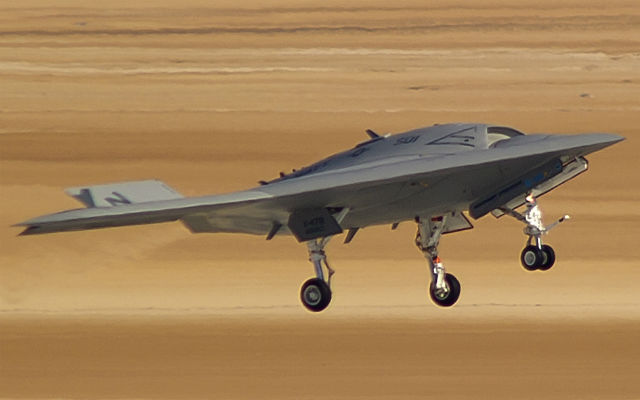 The UCAS-D development began in 2007 under a $635 million programme, and was completed in 2013 after it achieved a number of targets – including the UAV performing an arrested carrier landing on the USS George HW Bush in July that year.

Night-time operations have been stated as one area of development for the navy, and the first night flight of the system was conducted in April 2014 at NAS Patuxent River in Maryland, under separate funding.

Although UCAS-D is solely a development effort, the technology proven during the programme will be packaged into government-furnished information and offered to each bidder for the navy’s unmanned carrier-launched airborne surveillance and strike (UCLASS) programme.

Four bidders responded to a draft request for proposals for UCLASS released in April this year, and a full RFP is expected towards the end of 2014.

The bidders for the UCLASS programme are Boeing, General Atomics Aeronautical Systems, Lockheed Martin and Northrop Grumman – all of which were awarded preliminary design review contracts in August 2013. The system is expected to be operational – to some degree – by 2020.

The navy’s FY2015 budget proposal includes $403 million for UCLASS funding. The service projects spending $2.67 billion on the programme through to FY2019.