The US Navy has placed its third order with Rockwell Collins and Elbit Systems of America (ESA) for a night vision cueing and display system that allows pilots to fly and fight as if it were daytime.

The system lets pilots using Elbit’s four-lens panoramic night vision goggle visually cue weapons and sensors and see head-up displaysymbology in the dark, giving them the ability to engage in high off-boresight air-to-air shots and air-to-surface strikes as they would visually during the day.

ESA president and CEO Raanan Horowitz tells Flightglobal that the navy has already ordered 220 NVCDs, bringing the total to 340.

“The US Navy has been using the NVCD over the past couple years in various operational settings. We have supported these deployments and received positive feedback from the customer and the users,” says Horowitz. 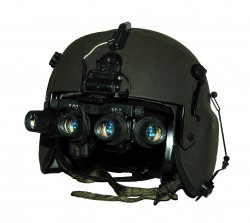 Horowitz says the navy’s NVCD is based on the company’s QuadEye Panoramic Night Vision Goggle (PNVG) that is designed for US rotary and fixed-wing pilots.

The Rockwell-Elbit team offers an international version of the night vision cueing and display system for F-16 users, although it is based on the twin-lens Exelis F4949 night vision goggle.