The US Navy has formally designated its planned long-range variant of the Bell-Boeing V-22 Osprey the CMV-22B, reflecting the aircraft’s new role in cargo resupply for carrier strike groups at sea.

Chosen to replace the Northrop Grumman C-2 Greyhound for the so-called carrier onboard delivery (COD) mission, the navy intends to procure 44 CMV-22Bs starting in 2018 for delivery starting in 2020.

Based on the US Marine Corps MV-22B version that carries troops into battle, the navy’s derivative will include an extended-range fuel system, high-frequency radio and public address system.

“Until recently, that aircraft was referred to as the ‘navy variant’. Now, that V-22 has an official designation,” the organisation said. “The main mission of the COD platform is to provide the joint force maritime component commander with time-critical, long-range aerial logistics support by transporting personnel, mail and priority cargo from advance bases to the sea base.” 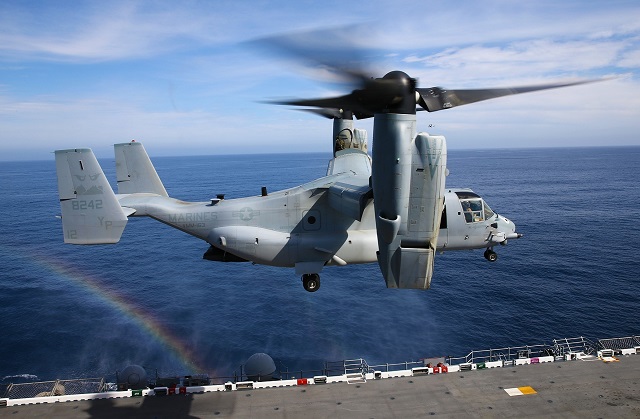 The designation supplants what has become an informal placeholder designation – HV-22. The navy references HV-22 in a January 2015 memorandum of understanding about the procurement and it has carried forward in media reporting of the COD variant.

When the first CMV-22Bs rolls of the assembly line, the most noticeable change will be its extended-range fuel tanks. The navy wants to increase the unrefuelled range of the MV-22B from 860nm in its current configuration to 1,150 nautical miles, but hasn’t said if it will increase the size of the sponsons or mount external fuel tanks.

One of the aircraft’s primary missions once the Lockheed Martin F-35C begins carrier operations is to shuttle the weighty Pratt & Whitney F135 powerplant from ship to shore.

An MV-22 demonstrated its proficiency in this role by using a specially-designed rig to transport an F135 power module to the USS Wasp during sea trials of the F-35B in May 2015. 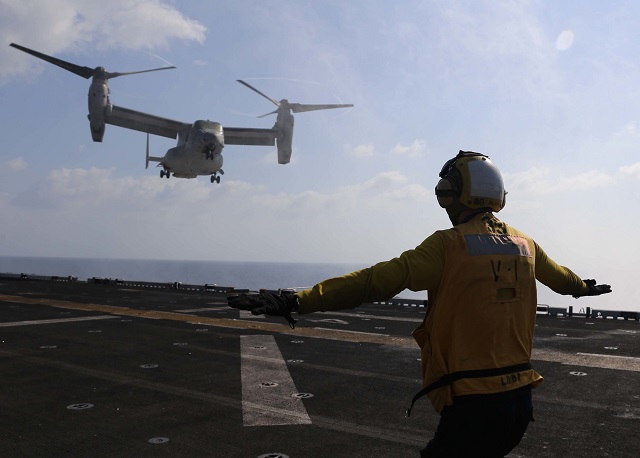