The US military and partner Arab nations have launched air strikes over Syria in an extension of the mission to counter the extreme Islamic uprising in the region.

Announced on 23 September by the US Department of Defense, the strikes are being conducted by a mixture of fighter and bomber aircraft, unmanned air vehicles (UAVs) and the US Navy’s Raytheon Tomahawk cruise missiles.

Bahrain, Jordan, Qatar, Saudi Arabia and the United Arab Emirates supported the strikes that took place on the evening of 22 September, and saw the nations conduct 14 attacks against Islamic State (IS) targets.

The USA used 47 Tomahawk missiles launched from the USS Arleigh Burke and USS Philippine Sea, which were operating in the Red Sea and North Arabian Gulf. US Air Force, Navy and Marine Corps fighters, bombers and UAVs in operation under the US Central Command (CENTCOM) conducted the airstrikes. 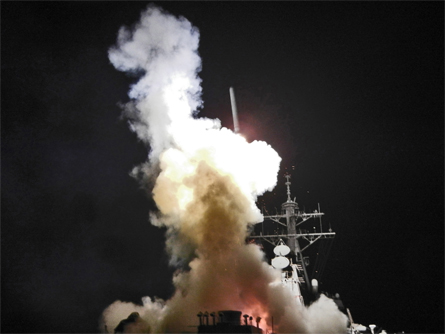 The USA has been conducting air strikes against IS militants in Iraq in recent months – initially in support of deployed American strategic advisors that are in-country to assist the Iraqi government – but has now evolved its mission to destroy all remnants of the terrorist group that is gaining a stronghold in the Middle East, including extending its strikes out to Syria.

The decision to begin the airstrikes in Syria was made by CENTCOM commander Gen Lloyd Austin, under authorisation granted by US President Barack Obama.

CENTCOM had conducted a total of 190 airstrikes across Iraq in the battle against IS militants as of 22 September, the DoD says.

As part of the Gulf nations’ participation in the fight against IS, Saudi Arabia has agreed to be the training ground for an initial batch of 5,000 anti-government Syrian fighters that oppose the Assad regime leadership in the country.

On 18 September, US Secretary of State John Kerry attended a meeting in Jeddah, Saudi Arabia, alongside ministers from the Gulf Cooperation Council, plus Egypt, Iraq, Jordan and Lebanon, during which Riyadh agreed to host the training.

“We're going to be training them in basic military skills to create a basic, competent, defensive force that can go to defend their citizens, their communities, to go against [IS] and also go against the Assad regime,” Kirby adds.

Equipment provided will include tactical and communications gear, arms and ammunition, he says.

Kirby was quick to point out that any speculation that Arab nations were not in favour of the mission was incorrect: “This notion that's out there that Arab countries aren't signing up is just false. We talked about Saudi Arabia. There are other Arab nations who have agreed in writing on the communiqué out of Jeddah to contribute to action against [IS],” he adds. “Each will do it in their own way, and each will talk about it in their own way.”

Meanwhile, Australia’s commitment to the IS fight saw an Australian Defence Force fleet of aircraft deployed to the Middle East on 21 September. 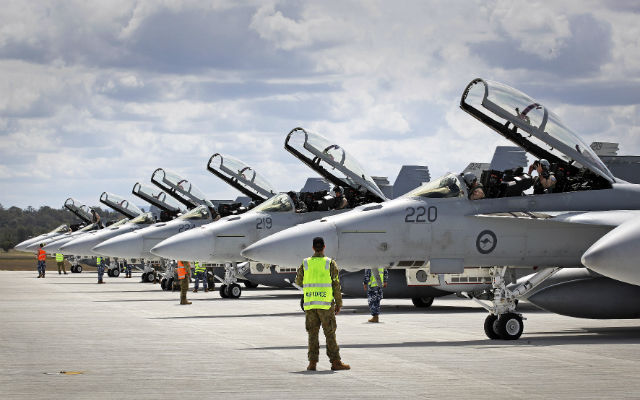 Eight Boeing F/A-18F Super Hornets from 1 Sqn at Amberley air base in Queensland, a Boeing E-7A (737) Wedgetail airborne early warning and control system aircraft from 2 Sqn based at Williamtown, New South Wales and an Airbus Defence & Space KC-30A (A330 MRTT) in-flight refuelling tanker from Amberley’s 33 Sqn were deployed to Al Minhad air base in the UAE.

Australia's deployment marks the operational debut for the Wedgetail and the KC-30, both of which have yet to be declared fully operational with the air force.