The US Air Force's desire to gradually phase out operation of the Fairchild Republic A-10 is in no way indicative of a lack of enthusiasm for the close air support (CAS) mission, its chief of staff Gen Mark Welsh says.

Welsh treated reporters at the Air Force Association annual air warfare conference in Orlando, Florida, to an impassioned defence of the CAS mission and plans to retire the A-10, which he said can fly to about 2028, regardless of funding levels.

"The A-10 is going to go away eventually," he says. "Stretching it as far as it can go is about 2027, 2028. If you go beyond that, you're talking about a huge investment trying to recapitalise that fleet. That makes no sense in today's environment. None."

Close air support "is a mission, not a platform", Welsh adds. "We keep saying that but it's absolutely true. We're going to have CAS 50 years from now."

The air force in 2013 proposed mothballing the A-10 fleet as a response to congressionally mandated budget cuts, which if triggered in fiscal year 2016 will wipe $10 billion out of the service's budget over the next five years. The notion started speculation that the USAF was trying to drop its CAS responsibility. 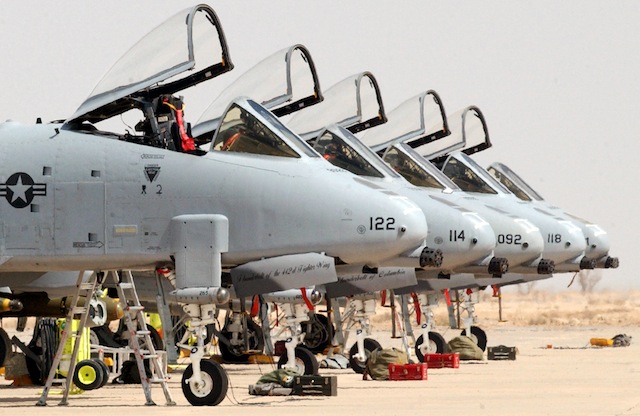 Welsh calls that sentiment "ridiculous", citing the 140,000 CAS sorties flown by the air force over the past 14 years. The A-10 also is not the only aircraft capable of CAS missions, nor has the air force only provided close air support since that aircraft has been in service.

At its operational peak, the US Army Air Corps flew 4,000 to 5,000 sorties a day over northern France in 1944 in support of allied troops during Operation Overlord and the Battle of Normandy, Welsh notes.

The air force has a long history of providing airborne overwatch for ground troops, stretching to the Second World War, when pilots flew the Curtiss P-40 Warhawk, Republic P-47 Thunderbolt and North American P-51 Mustang. It continued in later conflicts with the Douglas A-1 Skyraider and LTV A-7 Corsair, predecessors to the A-10. It will continue with the introduction off the Lockheed Martin F-35, Welsh says.

"Everyone's talking about how the F-35 is not going to do close air support, well that's all the Marine Corps is buying it for," he says.

More important that getting hung up on emotional attachments to certain platforms, Welsh says, is a focus on maintaining that history and an operational culture of swooping in low to attack enemies on the ground in support of infantry.

"We have to look at different ways to do the close air support mission with new airplanes like the F-35," Welsh says. "It will be a good CAS plane. It will take us a while to get it to what we want it to be, like we have with every airplane, including the A-10. We are trying to reset the CAS mission for the future and we've been trying to do that for the last two years. This is nothing new."

To that end, Welsh has called on Air Combat Command officials to hold a weeklong summit at Nellis AFB near Las Vegas, Nevada, in preparation for the Marine Corps' transition from the Boeing AV-8B Harrier to the F-35B. The army, navy and Marine Corps service chiefs will meet to discuss the future of CAS.

"We have to get to where the services all understand what the future looks like in this arena," Welsh says.

That extends to changing not only the platform but the weapons used to perform the role, he says. The A-10 sports a nose-mounted 30mm cannon design to blast Russian tanks during the later years of the Cold War. The gun is effective against smaller vehicles and personnel, but has a limited magazine and is heavy.

As a hypothetical scenario, Welsh mentions forward-firing laser-guided rockets, fragmentation rockets that would shatter into hundreds or thousands of individual projectiles before impact and lighter, smaller ammunition that will maintain a powerful punch.

"Let's have pods with bullets this long and put 50,000 in the pod", he says, spreading his index finger from his thumb by about an inch, "instead of everybody trying to get 1,000 or 600 out of a gun on a regular CAS sortie. There are different ways of looking at this problem that technology can help us solve."