US Air Combat Command might have too few Lockheed Martin F-22s, but the recently conceived “Rapid Raptor” method for quick-reaction fighter jet deployments is proving so successful that it might be extended to other airframes.

The method pairs four F-22s plus an accompaniment of pilots, maintainers, fuel and weapons with the Boeing C-17 strategic airlifter for self-contained, rapid global deployments with 24h.

According to ACC chief Gen Herbert “Hawk” Carlisle, the technique has proven successful on recent deployment in the Asia-Pacific and European theatres and could help the air force meet more of its operational commitments around the globe – even as its combat force shrinks.

“We’re working on ‘Rapid Next,’” he said at the US Center for Strategic and International Studies in Washington 18 September. “If we have US air power show up in places and at times people don’t anticipate, that has a great effect for assuring friends and partners and has a deterring effect on potential adversaries and aggressors.”

The soon-to-fly Boeing KC-46 tanker, which can carry cargo as well as conduct aerial refuelling, will play a significant role in the rapid deployment strategy alongside the C-17, Carlisle adds. 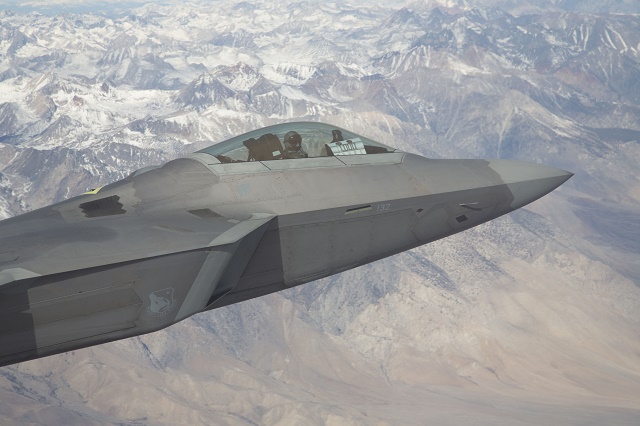 Many of the service’s combat squadrons are under significant strain, having been on a constant war footing since 2001, and some even argue since Operation Desert Storm in Iraq.

The service currently buys fewer aircraft than even the army and navy, and officials are mulling a range of options to compensate for an aging, shrinking force. Carlisle says the introduction of new technologies is one way to offset potential threats.

He says directed energy weapons like high-power microwave emitters – perhaps the Boeing/Raytheon “CHAMP” cruise missile – and lasers could be used to disable surface-to-air missile sites in the not-too-distant future.

He says offensive and defensive laser weapons are “not as far away as some people think”.

“I think by 2020, there turn of the decade, we have a chance to be there,” Carlisle says. “We’re working on getting it into a podded solution for a fighter-sized aircraft” with the main challenges being the size, weight, power and cooling requirements and beam control.

In another matter, the general used the public forum to reiterate his concern about China’s lone-range PL-15 air-to-air missile. US military officials usually shy away from naming specific weaponry for operation reasons, but it appears the weapon is of significant concern to the air force.