The next generation of weapons technology that replaces the Lockheed Martin F-22 and F-35 may not be a single-seater or even a fighter, but the end result should have a larger magazine, according to the retiring head of the US Air Force’s Air Combat Command (ACC).

Bringing to light at least five years of internal discussions about a so-called “sixth-generation fighter”, Gen Mike Hostage’s remarks on 30 July at an event hosted by the Air Force Association (AFA) illustrates the rapidly evolving nature of the air dominance mission.

“It isn’t necessarily another single-seat fighter,” says Hostage, according to an audio recording posted online by the AFA. “I’ve been telling the teams that work for me, ‘Don’t start into this process thinking single-engine [or] twin-engine. Don’t be thinking in terms of a platform'." 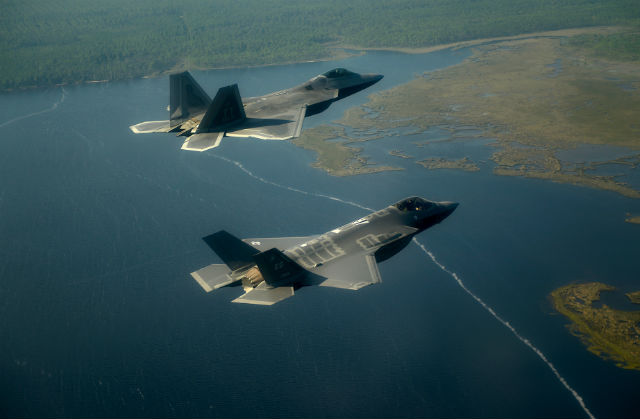 In his role as ACC commander, Hostage was charged with shaping the requirements for whatever follows the F-35 in the air force’s acquisition process, and he has preserved the open-ended approach outlined in the 2009 document.

“If it’s a single button on a keyboard that makes all our adversaries fall to the ground, I’m okay with that,” Hostage says.

Since 2009, the air force has released a variety of reports on future air dominance technologies – including a concept for a tailless supersonic air vehicle. Air dominance weapons have also been studied, although the status of a next-generation air-to-air missile is shrouded in secrecy.

For Hostage, a key limitation of relying on a single platform appears to be the limited magazine of onboard weapons. He laments that although the F-22 can penetrate highly defended airspace, its internal weapons bay is limited to eight missiles.

“I can only whack eight bad guys in the process,” Hostage says. “I’d like to go there and whack a whole bunch of them.”

It may seem early to start thinking about a sixth-generation weapon system, as the two fifth-generation fighters are still relatively young. The F-22 entered service in 2006, and the F-35A is not scheduled to achieve initial operational capability until fiscal year 2016.

Hostage, however, thinks the air force is already behind schedule for fielding a replacement aircraft in time.

“Given that tortuous acquisition process, we’re already behind the timeline to get something on the ramp in order to properly phase out an aging fleet. I’m living with an ancient fleet at the moment,” Hostage says.