The US Air Force has kept some Lockheed Martin AC-130U gunships marked for retirement for use as directed energy weapon testbeds as the service pursues airborne lasers for offensive and defensive uses.

Maj Gen Jerry Harris, vice-chief of Air Combat Command, says a number of gunships that would have otherwise been sent to the boneyard are now being used to test emerging directed energy technologies, like lasers and microwave energy guns.

“We have a requirement for a minimum number of gunships,” Harris said at a 28 July Centre for Strategic and Budgetary Assessments directed energy summit in Washington. “We have some additional U-models we will fly longer for testbeds.” 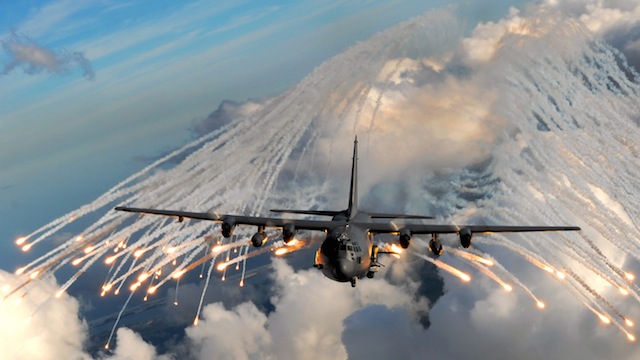 Lt Gen Bradley Heithold, commander of Air Force Special Operations Command, said at the event that he wants the new C-130J Ghostrider gunship being developed to have both an offensive airborne laser capability and “active denial system,” which is a microwave energy heat blast used to disperse crowds or a single threat.

“We want to build the ultimate battle plane that can fight its way to its objective,” the commander says.

While AFSOC’s primary focus is gunship-based lasers, Air Combat Command is also pursuing the technology for fighters and bombers. Harris says the Boeing F-15E Strike Eagle has “power to spare” and a testbed aircraft is available for experimentation.

He says the air force is looking for airborne lasers for integration into a standard pod or conformal tank for laser demonstrations. “It’s past the time to test these in the labs; we need it in the field,” he says.

Harris says laser weapons probably won’t find their way onto the Lockheed Martin F-35 Joint Strike Fighter any time soon, but might be integrated in the future beyond the Block 4 rollout, which is due to add new capabilities to the fifth-generation jet from 2019 to 2025.