USAF issues RfP for initial design of next Air Force One

As America prepares to pick its next president, the US Air Force is about to put Boeing on contract to begin designing the next version of Air Force One.

Boeing’s four-engine 747-8 wide-body jet was chosen in January 2015 to replace the current head of state fleet, which is comprised of two 747-200-based VC-25As. Boeing received its first Presidential Aircraft Replacement (PAR) contract earlier this year for risk reduction activities and now US Air Force Materiel Command wants to fund another task for preliminary design.

A request for proposals (RfP) issued on 10 May covers “preliminary design activities required to begin development of two Presidential mission-ready aircraft, based on two government furnished Boeing 747-8 aircraft procured under a separate contract action on this contract”.

Sales of the heavy airliner and the 747-8F freighter version have been sluggish, with Boeing reducing output in Everett, Washington to one aircraft every other month. That makes every order significant.

"The RfP quantity of two aircraft is based on the [under secretary of defence for acquisition, technology and logistics]-approved acquisition strategy and the FY2017 president's budget submission," a service spokesman tells Flightglobal. 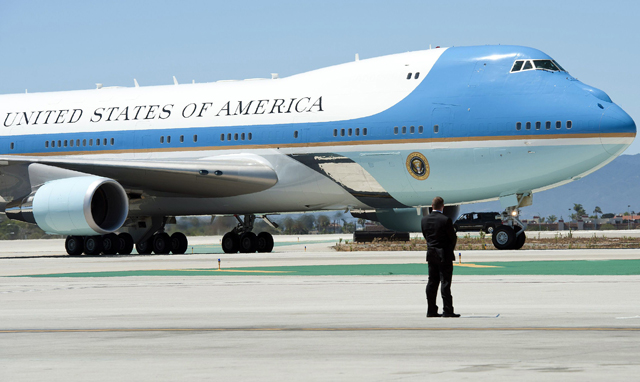 The air force must maintain a minimum of two aircraft at Andrews AFB in Maryland to ensure that at least one is always ready to airlift the president and his entourage at a moment’s notice.

The lead VC-25A aircraft's first tasking was to transport President George Bush 26 years ago and now it is nearing the end of its planned 30-year service life.

The air force has requested $351 million for fiscal year 2017 to begin designing and building 747-8s VIP derivatives, which must maintain the same level of connectivity and security as the White House.

The programme office expects to award a sole-source contract to Boeing later this year for delivery of two 747-8s. The formal engineering and manufacturing development phase will begin in mid-2018.