The US Air Force has revealed its bomber for the 21st century, the Northrop Grumman B-21 long-range strike bomber.

The official designation comes as the air force for the first time releases an artist's rendering of the still-classified bomber — a flying wing design similar to the Northrop B-2 and the company's concept for the previous Next-Generation Bomber (NGB) project.

The air force hasn’t purchased a new bomber in this century and is still dependent on 54-year-old Boeing B-52H and 28-year-old B-1B. Its 21-year-old B-2 Spirit, the only in-service stealth bomber, will be in use through 2060, officials say.

Revealed at the closing of her “state of the air force” address in Orlando, Florida on 26 February, USAF secretary Deborah Lee James revealed the official B-21 designation to rapturous applause.

“Our fifth-generation global precision attack platform will give our country a networked sensor-shoot capability that will allow us to hold targets at risk in a way the world and our adversaries have never, ever seen,” says James. 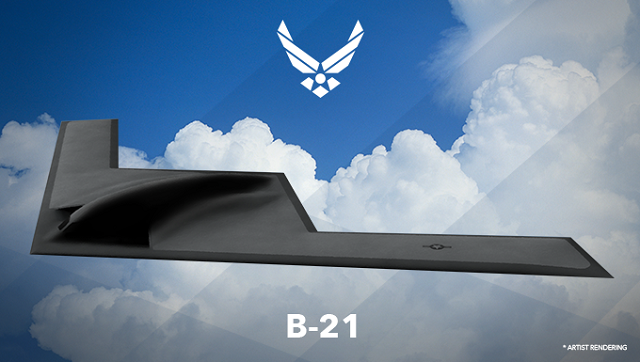 Many bomber experts have been pushing the B-3 tag as a sequential follow-on to the B-1 and B-2. However, Mitchell Institute dean David Deptula believes the new designation reflects that fact that it is the air force’s premier bomber platform for the 21st century.

“It’s not surprising in terms of the shape based on the physics of low observability, but it’s good that we have an artist’s rendering out and the designation is a good one too,” says the former three-star air force officer.

The air force picked Northrop’s design in October and is proceeding with development after the US Government Accountability Office rejected losing team Boeing and Lockheed Martin’s bid protest.

The new stealth bomber will cost $23.5 billion to develop and is worth $564 million per aircraft, according to US government estimates.

The USAF wants 100 B-21s, but Deptula believes the true requirement should be 174.

“We need 174 of them,” he tells Flightglobal after the announcement. “We need a minimum of one squadron for 12 air expeditionary forces to establish the rotational base requirement during peace time to be able to shape and maintain peace and stability around the world.

“We need that number to maintain the ability to support our national security strategy to engage in two major regional conflicts if, in fact, it’s necessary to go to war, particularly in the advanced threat environment that has been growing.”

Northrop’s bomber team was characteristically coy in its response to the unveiling: “Northrop Grumman is proud to serve as the prime contractor for the B-21 Bomber in partnership with the US Air Force, to deliver a capability that is vital to our national security. Any further questions should be directed to the air force.”