USAF rules out international A-10 sales

The US Air Force has closed the lid on discussions about shopping the A-10 Warthog to allies, telling Flightglobal it will not sell the close-in attack aircraft to anyone.

Boeing triggered speculation about whether the US government would consider selling the aircraft it wants to retire when a company official told reporters there have been “early discussions” about international sales.

“It’s something we would be interested in, but again, it depends where the air force goes with retirements,” Paul Cejas, chief engineer of off-Boeing programmes, told reporters during a media roundtable in May.

In a 23 July statement, air force spokesman Melissa Milner said: “There are no anticipated sales of A-10 aircraft to anyone.”

Asked to clarify the statement in a follow-up call, she said the air force has no intention at all of putting the A-10 up for sale.

The response quashes any hopes Boeing might have had about upgrading and sustaining the aircraft for a foreign owner, since the air force would prefer to send the whole fleet to the boneyard to save about $4.2 billion over five years.

The company says it is the closest thing to a prime contractor for the aircraft, which was designed and built by Fairchild Republic in the 1970s. Boeing is most of the way through a multi-billion dollar re-winging programme that will extend the life of the aircraft, and says it would be cheaper for the air force to complete the upgrades than break that contract at this point. 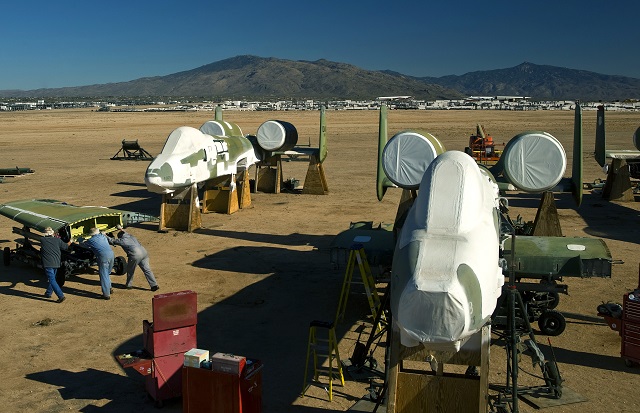 The military aircraft "boneyard" in Arizona contains 140 retired A-10 Warthogs.

Despite being described by Air Combat Command chief Gen Hawk Carlisle as the “best close-air-support aircraft ever”, the air force has been on a campaign to retire the A-10 fleet as a cost-cutting measure since proposing the move in its fiscal year 2015 budget submission. The service proposed retiring the fleet again in its 2016 submission, saying it doesn’t have the funds to keep the ageing aircraft going, and needs to free up maintainers to support the Lockheed Martin F-35 Joint Strike Fighter roll out.

Congress is staunchly opposed to parting with the low-, slow-flying jet because of its unique capabilities, but has permitted the transfer of some aircraft into “type 1000 storage”, which preserves the aircraft in near-flyaway condition.

There are currently 140 retired Warthogs in the care of the 309th Aerospace Maintenance and Regeneration Group at Davis-Monthan AFB in Arizona. Of those, 21 are in type 1000 storage, the air force says.