A panel of military scientists is briefing senior US Air Force leaders on ways to make the defenceless General Atomics MQ-9 Reaper and Northrop Grumman RQ-4 Global Hawk more useful in a war against a sophisticated enemy that has the ability to hunt and kill aircraft.

The MQ-9 and RQ-4 unmanned air vehicles were purchased in the 2000s when the conflicts in Afghanistan and Iraq were at their peak. However, as they were operating in uncontested airspace, they were not equipped with the kind of defensive aids and self-protection systems typical of manned fighter aircraft.

Officials now worry they will be shot down almost immediately if flown anywhere the US and its allies do not dominate the skies.

Now, the service's Scientific Advisory Board (SAB) says adding readily-available sensors, weapons, and threat detection and countermeasures systems to the MQ-9 and RQ-4 for better situational awareness and defence could see the aircraft deployed on riskier operations in the future.

“The SAB found that both the MQ-9 and RQ-4 could be modified in specific ways to provide utility in contested environments at various levels of contestation,” says Werner Dahm, SAB chair and air force chief scientist from 2008 to 2010.

“There’s about 3,000lbs [1,360kg] of payload capacity on most of those platforms. You could put quite a few additional systems on to them; they have the size, weight and power to be able to run these systems.” 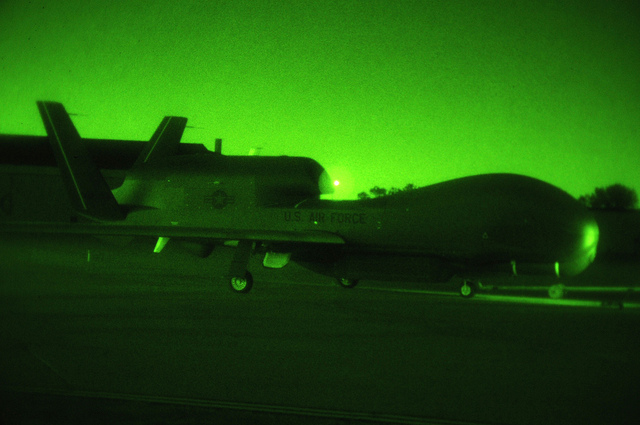 Speaking at a media event 3 August, he said the General Atomics MQ-1 Predator the USAF is phasing out would not be much good in a high-end conflict except to draw enemy fire, but the MQ-9 and RQ-4 could provide greater support with certain upgrades, like radar warning receivers and new weapons integration.

Manned-unmanned teaming was one proposal that gained serious attention during the study. Sense-and-avoid systems, however, did not feature prominently because the capability to operate without waiver in regulated airspace would matter less in an air war.

Dahm says adding flight control algorithms for multi-UAV control and automatic take-offs and landings – as well as installing redundant positioning, navigation and timing systems – could secure a role for the MQ-9 and RQ-4 beyond the counter-insurgency operations of the past 15 years.

The scientists also looked at pairing the MQ-9 and perhaps even the RQ-4 with in-production air-to-air and miniature air-to-ground weapons to make them more lethal.

However, Dahm cautions that future upgrades should be informed by appropriate modelling and simulation, and open system architecture standards are needed to make plugging new sensors and capabilities into UAV systems easier.

Dahm says the air force has spent billions of dollars on over 300 MQ-9s and RQ-4s, and “judicious investments” could add at least five new missions to their current repertoire. 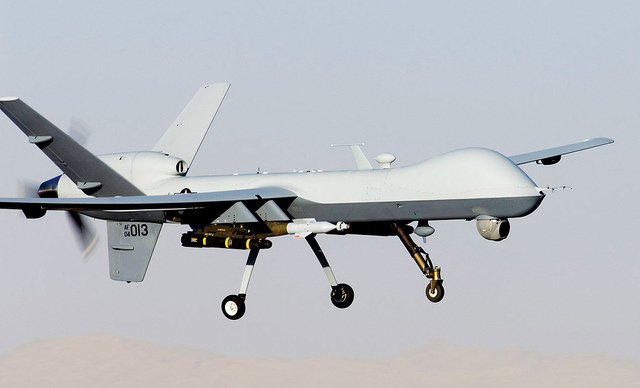 The study, titled “Enhanced Utility of Unmanned Air Vehicles in Contested and Denied Environments”, was one of three conducted by the SAB in its 2016 budget year. Classified results from those studies – which also explored quantum mechanics and platform cyber vulnerabilities – have already begun circulating within the department.

Dahm says he will meet with Air Force Secretary Deborah Lee James on 7 August to discuss next year’s research, which might examine military space architectures and electronic warfare. The terms of reference for those projects have already been drafted, but the service secretary will decide which three proceed.