US Air Force student test pilots recently trialed Textron AirLand’s Scorpion jet and the Beechcraft AT-6 light attack turboprop, conducting 12 flights in the Scorpion and seven with the AT-6 during a week-long visit to companies’ facilities in Wichita, Kansas.

Textron AirLand and Beechcraft, both owned by Textron, are marketing the Scorpion and AT-6 aircraft as versatile, multi-mission platforms for domestic and international customers. 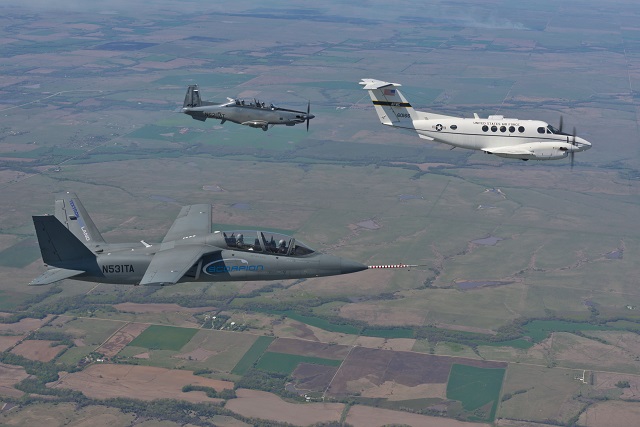 The first Scorpion demonstrator was produced in 2013, and the company hopes to deliver a second one in the second quarter of 2016.

Textron says the Scorpion completed three flights per day and successfully completed all of its missions.

“After each flight, Scorpion rapidly returned to the air, with an average aircraft turn time of 31 minutes, and a best turn time of 20 minutes,” the company said in a May 14 press release. “The AT-6 also turned in an excellent performance for its seven flights, with 100-percent aircraft availability and 100-percent mission accomplishment.”

“The demonstrations not only allowed us to showcase the capabilities of the aircraft, but it also allowed us to gather feedback, which has already proven beneficial as we continue to prepare these aircraft for entry into the market,” says Beechcraft Defense President Russ Bartlett.

Textron AirLand President Bill Anderson says after the student’s visit, the Scorpion flew from Wichita to South America to demonstrate its capabilities to an undisclosed air force in that region.

The Scorpion’s 6,627-nautical-mile, 10-day trip included 17 sorties and 28 hours of flight time. It conducted six demonstration flights along the way and participated in static displays at the US Defense Department’s Southern Command and Central Command headquarters, both in Florida. The aircraft returned home May 5.

The Scorpion will make its debut at the Paris Air Show next month as Textron AirLand pushes hard to find a launch customer for the surveillance and strike jet. The aircraft will then go on a European tour, which includes a visit to the United Kingdom.