The United States plans to export an advanced, tungsten-laden bomb that is designed to cause less collateral damage than its predecessors, but be more lethal.

The 227kg (500lb) BLU-129/B was originally produced by Aerojet Rocketdyne as a quick reaction capability for the war in Afghanistan as a way of reducing civilian deaths by using a cabon-fibre-wound composite shell casing to limit the blast radius. Its development followed one particularly disastrous airstrike on a wedding party in 2008 that killed dozens of women and children along with a number of Taliban insurgents.

The bomb entered service in 2011, and an initial production run of up to 800 units ended earlier this year. Now, the US Air Force says it is interested in restarting production for both domestic and international consumption, with the government approving exports to any nation that already purchases joint direct attack munition (JDAM) guidance assemblies. 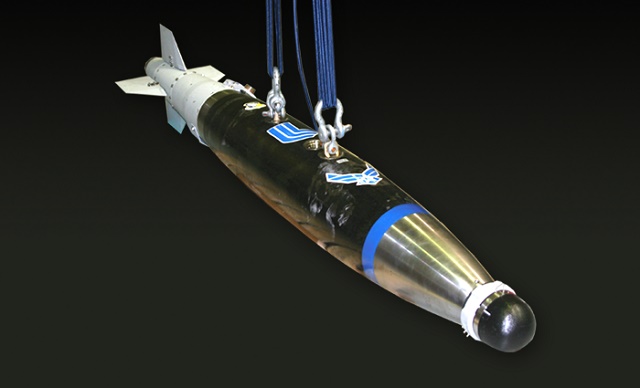 “The BLU-129/B continues to be an operational success story in multiple theatres of operation, providing a very low collateral damage weapon to reduce unintended fratricide,” says Jasmine Porterfield, a spokeswoman for the air force armament directorate at Eglin Air Force Base in Florida. “The carbon fibre enables the BLU-129/B to achieve three-times less collateral damage compared to a steel-cased MK-82 warhead, and the tungsten-laden case high explosive has a higher near-field lethality. Actual numbers are classified.”

The programme office is currently looking at potential vendors to build the bomb casings, since the initial selection of Aerojet Rocketdyne bypassed normal acquisition procedures due to the urgent operational need. The service anticipates a production rate of 100 to 400 empty bomb casings per year for five years. Those casings would be delivered to the McAlester Army Ammunition Plant in Oklahoma to be filled with explosives.

Porterfield notes that the air force is still considering its total inventory requirement, and the most appropriate acquisition strategy. The request for information will determine whether enough potential manufacturers exist to hold a competition.