Ejecting out of a fighter jet at Mach 1 has obvious risks, but being killed by your helmet – a safety device meant to save you – is not one of them.

Yet, as US Air Force pilots are increasingly weighed down by helmets laden with gadgets, such as a display unit or night-vision goggles, bailing out of military aircraft has become more dangerous.

During ejection, these devices can catch the windstream like a sail and whiplash pilots, causing neck and head injuries, or even death. This was the case in a fatal USAF Lockheed Martin F-16 ejection off the coast of Italy in 2013. The danger is especially pronounced among petite pilots, often women or smaller men, who have less muscle mass in their neck to resist wind blasts.

The issue has caused the USAF to rewrite its book on safety. It has also sent ejection seat manufacturer UTC Aerospace Systems back to the drawing board and to a little-known test facility outside Zion National Park in Utah, called Hurricane Mesa.

Sitting atop a 1,200ft red rock plateau, UTAS's Hurricane Mesa facility has hosted ejection seat tests since the dawn of the Cold War in 1954. The hardscrabble land is home to a forest of pinyon pines, a scattering of Native American artefacts, such as abandoned fire pits and broken clay pottery, and a 3,660m (12,000ft)-long ejection test track. 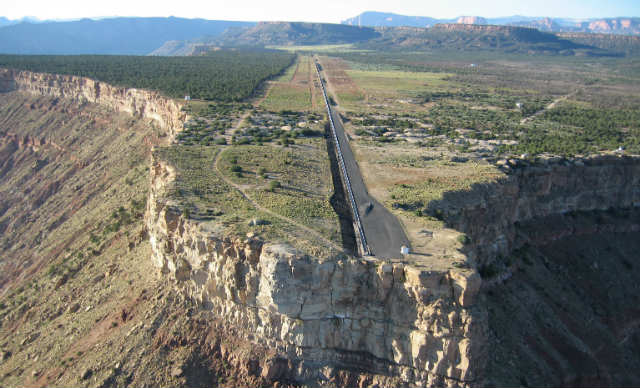 UTAS is increasingly making use of this desert site to test its latest ejection seat – ACES 5 – which comes with additional pop-up restraints intended to safely hold a pilot’s head, arms and legs in place during an ejection. Also new is an improved parachute designed to slow and steady a pilot's descent.

ACES 5 is currently being added to the USAF's Northrop Grumman B-2 stealth bomber fleet. The company says it also has recently won five other bids, but declines to name aircraft manufacturers, saying it is unauthorised to speak about the "proprietary" programmes.

But these early wins for the ACES 5 programme are small compared with what is coming down the track: the USAF's Next Generation Ejection Seat competition, which will replace the escape systems on types such as the Boeing B-1B, F-15, Fairchild-Republic A-10, Lockheed F-16 and F-22.

UTAS values the contract as worth potentially hundreds of millions of dollars, and as involving thousands of aircraft. A request for proposals is expected to be released around June 2019, with the UK's Martin-Baker – producer of the Mk 16 ejection seat for the Lockheed F-35 Lightning II – also interested in the requirement.

Altogether, these contract opportunities have substantially increased the pace of testing at Hurricane Mesa to a tempo not seen in years.

"If you project over the next three years, there is going to be a big increase [in the number of tests]," says John Fyfe, UTAS director of air force programmes. "It's been characterised to me as full – at least once a month for various different programmes." 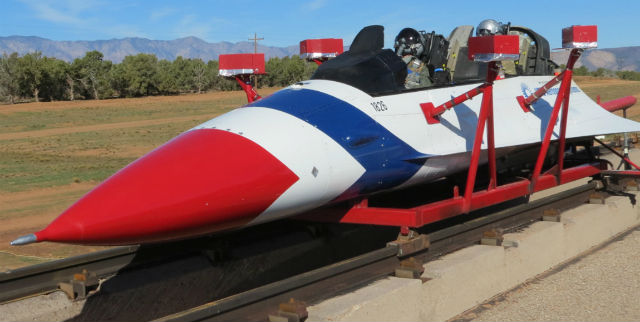 At roughly 3.7km (2.3 miles) from the staging area to the cliff's edge of Hurricane Mesa, the test track distance is more than enough to accelerate a sawn-off F-16D cockpit ejection rig to 596kt (1,100km/h) equivalent airspeed.

Using a cluster of 105 high-velocity aircraft rockets – leftover unguided missiles from the Korean War era – it took only 5.4s for this to reach its top speed during a 25 October test witnessed by FlightGlobal. It was slowed and stopped by dipping a metal brake into a water trough several hundred metres long at the end of the track.

UTAS engineers are confident that they can hit their target speed within a range of about 10kt, although this takes some scientific guesswork. "It's a little bit of a crapshoot, because you have to calculate the propulsion load out the week before," says Bob Sadler, the facility's historical information and site tour expert. He notes the need to consult a weather forecast, as colder air causes the rockets to produce more thrust.

The 50-year-old rocket motors – each burning for just 0.94s and producing an average of 5,400lb-thrust (24kN) – are also a bit fickle. "Typically because they are old, not all of them will fire," says Fyfe. "When that happens, they don't let anybody down to the track until those have been [declared] safe. There's a 30min cooling off period. If you've ever hunted, it's like if a shotgun shell doesn't go off: you treat it like a misfire."

During the recent test, enough rockets fired to push the rig to its top speed, at which point the two ejection seats popped off. The seats carried anthropomorphic test dummies named LARD and LOIS: military acronyms, which abbreviate as large anthropomorphic research dummy and lowest occupancy in service. The larger of these simulates a 111kg (245lb) pilot, and the smaller one weighing 46.7kg – spanning the USAF's acceptable weight range for aircrew. 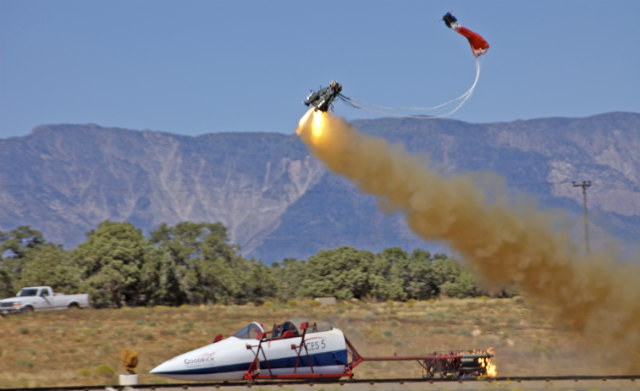 An F-15 cockpit section in use during a previous test

Under real-life conditions, the ejection process starts after a pilot pulls the ejection handle and lasts only moments. Initially, a series of small explosions cut the bolts that hold the glass canopy to the F-16's fuselage. Once the canopy is ripped clear of the aircraft by the outside windstream, another small charge goes off in a piston located behind the ejection seat.

"It’s just like a big shotgun, only the shot is the seat," says Sadler. "It basically goes bang and pushes the seat up to a point where the seat leaves the airplane."

From there, a booster rocket launches the ejection seat clear of the aircraft, while a smaller gyroscope-controlled rocket underneath thrust vectors forward and aft to keep the seat upright; a must to stabilise the pilot before the parachute is deployed.

The force of an ejection slams a pilot's head into the chest and legs and arms downward. To stop the pilot's limbs from flailing in the windstream once the ejection seat emerges from the cockpit, UTAS has added a series of restraints to its ACES 5 seat. For the head and neck, a spring-loaded brace catches the aviator's helmet from the sides and behind, preventing twisting or slamming, while for the legs and arms, pop-up panels and a spider web of bungee cords emerge on either side of the seat, prevent flailing limbs. 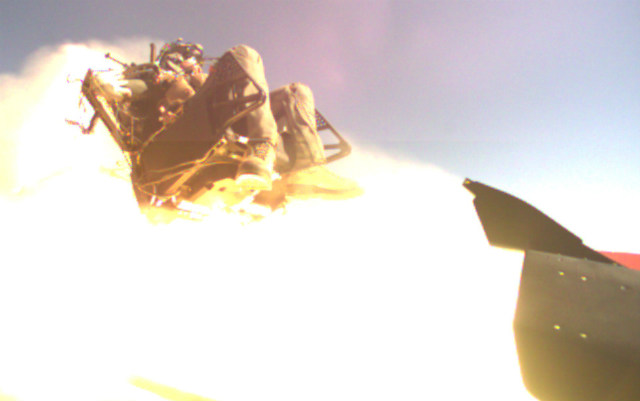 Restraining head and neck whiplash is vital for obvious reasons, but Fyfe says stopping leg and arm movement is crucial too.

"Where arm flail injuries can be catastrophic is where I am ejecting over water, [because] I still need to manually get into my life raft," he says. "There was a high-speed ejection over the Gulf [of Mexico] a couple of years ago where the guy lived through the ejection, and had both shoulders dislocated, and drowned because he couldn't get himself into the life raft."

Leg flailing can cause gruesome and fatal injuries, he adds.

"You have pretty big arteries in your legs. If your legs get outside the structure of the seat during a high-speed ejection – think of it like a wishbone," says Fyfe. "So typically, that's a fatal injury just because of blood loss."

But surviving the initial ejection is not the whole game, as the pilot still must make it safely to the ground.

"The Air Force Safety Center has data that shows once you eject out of an aircraft, 45% of the ejection-related injuries after that point are your parachute landing fall – hitting the ground," says Fyfe. "And that's due to either coming down too fast or, depending if you are oscillating forward or back, hitting the ground awkwardly."

To solve that problem, UTAS has developed a new parachute called the GR7000 that it believes will reduce the post-ejection injury rate to 5%, and slow pilot descent to less than the USAF's 1,440ft/min (7.32m/s) requirement.

"The new chute has much less oscillation," Fyfe says. "And we’ve demonstrated for the 245lb male fully loaded out – so with over 300lb total including gear – [that he] easily descends under [7.32m/s]."

UTAS says that according to initial assessments of its most recent ejection test at Hurricane Mesa, all systems functioned correctly and test dummies LARD and LOIS made it safely to the ground. The company will spend the next several weeks examining data from eight high-speed cameras and 64 sensors on the dummies, which recorded head and neck tension, extension, compression, and flexion g-loads, among other measurements.

Fyfe, a former USAF F-16 pilot, notes that the analysis can be tedious and painstaking, especially when compared with the explosive test run. But fine-tuning the process has big rewards.

"We have flown in ACES seats, and our friends and family still do, so we know firsthand what's at stake," he says.

Story amended with an updated number of contract wins and the correct reference to the Gulf of Mexico.