After almost 25 years of unstinting support, the US Marine Corps’ belief in the Bell Boeing V-22 Osprey tiltrotor will be put to the test in September when the unique aircraft begins its first combat deployment, to al Asad in .

The seven-month deployment by some 10 MV-22B assault transports of VMM-263, the first operational Osprey squadron, will come 24 years after the tiltrotor was selected to replace the USMC’s Boeing CH-46 helicopters, which are now almost 40 years old.

The Marines have lost seven CH-46s in combat operations in , and commanders believe the half-helicopter/half-aeroplane V-22 will offer greater survivability because it can fly faster and higher and has features designed-in to reduce vulnerability.

But the Osprey has had a checkered development history, including four crashes that killed 30 people, and news of the deployment plans drew predictable criticism from those who believe the tiltrotor is too complex, expensive and trouble-prone.

Announcing the V-22’s combat debut, Marine Corps commandant Gen James Conway acknowledged the controversy, saying “the quantum leap in technology that this aircraft will bring to the fight has been a road marked by some setbacks, lots of sacrifices and the success” of the unit now preparing for deployment. 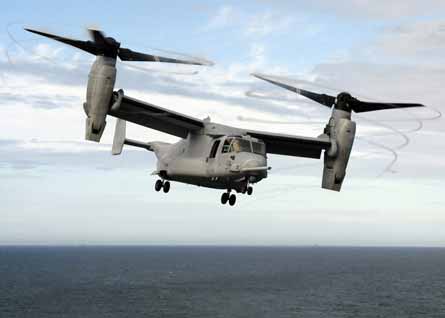 Compared with the CH-46, says commandant for aviation Lt Gen John Castellaw, the MV-22 “goes twice as fast, three times as far, and is six or seven times more survivable than the aircraft it replaces”.

The MV-22’s infrared and acoustic signatures are lower than the CH-46’s, Castellaw says, and the aircraft is equipped with missile warning system, laser and radar warning receivers, chaff dispenser and ramp-mounted gun.

With small-arms fire and rocket-propelled grenades posing the biggest threat, the tiltrotor’s ability to descent into and climb out of the landing zone quickly will be critical. “On a mission, it can be at 200kt-plus and climbing to altitude in 15s,” says Castellaw.

The 17-month grounding that followed two fatal crashes in December 2000 has resulted in changes to how the Osprey will be used in combat.

To avoid a phenomenon known as vortex ring state (VRS), a form of rotor stall that can occur when descending rapidly and low airspeed and high power, the tiltrotor will not make a helicopter-like approach to the landing zone.

Instead the MV-22 will fly in a 240kt, descending at up to 6,000ft/min in fixed-wing mode. The tiltrotor will descend to 200ft altitude on approach to the landing zone then transition to helicopter mode.

“We do not intend to…come out of a high altitude in helicopter mode,” says Castellaw. But the V-22 has been equipped to warn the pilot of VRS, an alert sounding when the rate of descent exceeds 800ft/min at airspeeds of 40kt or below.

A recovery technique has also been developed – the pilot can “blip” the nacelles 15° forward to accelerate out of the turbulent air surrounding the rotors. Castellaw contrasts this with the standard helicopter recovery technique of lowering the nose and reducing power, which “helicopter guys don’t like to do”.

The Osprey is likely to face other, more mundane issues on its operational debut, including maintainability and reliability challenges exacerbated by the harsh conditions is .

The manufacturers has also been spending their own money to build up a stock of spares for the aircraft, although the USMC says the MV-22’s maintenance manhours per flight hour figure is currently “a fraction” of that for its Sikorsky CH-53Es.

Queried on why the Marine Corps chose Iraq for the Osprey’s combat debut, rather than the potentially less demanding Horn of Africa, Castellaw says: “It is our view that the V-22 right now can do the greatest amount of support in Iraq.”