Bombardier has launched the flight test campaign of the stretched, 135-seat CS300 with a 4h57min sortie from the company’s final assembly centre in Mirabel, Canada.

The flight test begins a nine-to-15-month certification programme for the largest variant of the CSeries.

The 110-seat CS100 is currently scheduled to achieve entry into service in the second half of 2015, having began flight testing nearly 18 months ago.

Although the CS100 is now running two years behind schedule, Bombardier has never altered its plan to deliver the first operational CS300 six months after completing the same milestone for the smaller variant.

Accounting for about three-fourths of all 243 firm orders booked so far, the commercial success of the CS300 may hold the keys to the future of the programme.
It enters flight testing with the benefit of 18 months of painful lessons learned on the CS100 programme.

The smaller variant has dealt with multiple setbacks stemming from software delays and an engine malfunction that grounded the fleet for five months. 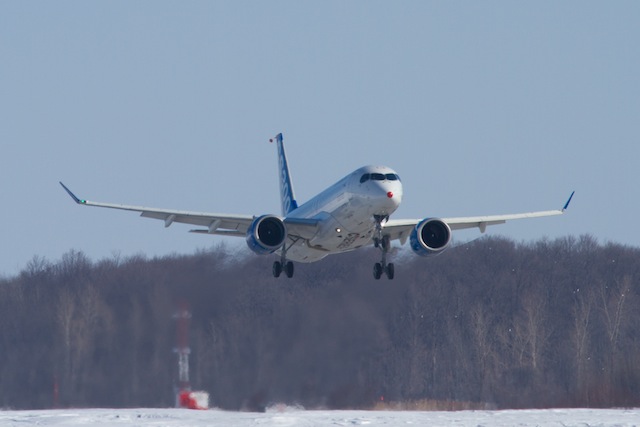 An oil system component inside the Pratt & Whitney PurePower PW1500G turbofan failed during a 29 May ground test, causing pieces of the low-pressure turbine to disintegrate and damage the wing and fuselage of the first test vehicle FTV-1. Flights resumed four months later with a minor redesign of the oil system.

Several more weeks passed before Bombardier resolved the second major issue for the CS100. Until early October last year, the four aircraft in the flight test fleet had not activated the envelope protections enabled by the fly-by-wire system, due to the late delivery of the flight critical software.

The CS300 stands to benefit from a functioning fly-by-wire system with envelope protections and a redesigned engine. Other than the slightly longer fuselage, the CS300 shares the same Rockwell Collins avionics augmented by Parker Aerospace fly-by-wire controls, P&W engines and aluminium-lithium panel fuselage structure of the CS100.

Those three components account for Bombardier’s claimed 15% operating cost advantage of the CS300 versus the type’s nearest competitors, which include the Airbus A319neo and the Boeing 737 Max 7.