The US Defense Advanced Research Projects Agency has released a video animation of the planned Oblique Flying Wing X-plane demonstrator now being designed by Northrop Grumman.

The animation shows the asymmetric flying wing sweeping from 0° to 65° as the unmanned demonstrator accelerates Mach 0.6 to Mach 1.2.

If it flies in 2010 as planned, the OFW X-plane will be the first tailless, supersonic, variable-sweep flying wing.

Potential applications include a long-range bomber or persistent intelligence, surveillance and reconnaissance platform that can penetrate enemy air defences supersonically then loiter subsonically over the target area.

Northrop was awarded the $10.3 million, 20-month contract in March 2006 for the initial preliminary-design phase of the OFW X-plane demonstrator programme. 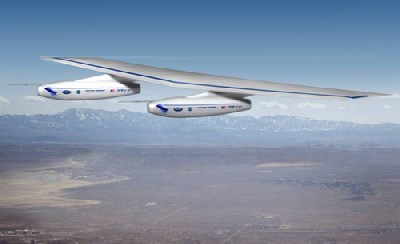 Although DARPA’s stated goal is to enable the OFW to be considered as a technology option for an aircraft to be operational in the 2020 timeframe, the US Air Force is looking at more conventional configurations for its next-generation bomber, which it wants to enter service in 2018.

More coverage of the Oblique Flying Wing, including images of original concept models ...