The drop test on 23 March by the Naval Air Station Patuxent River-based CF-05 test aircraft is the first of many that will take place in 2016 to qualify the bomb for use by the stealthy combat jet.

Until now, the F-35 has only released satellite-guided Mk80-series bombs equipped with Boeing Joint Direct Attack Munition (JDAM) tail kits from its internal weapons bay. Equipping the aircraft with a “standoff” glide bomb allows it to hit threatening targets, like anti-aircraft missiles, from safer distances.

“The addition of this guided glide bomb equips the F-35 Lightning II with a medium-range, all-weather weapon capable of engaging targets from further vantage points well out of range of typical enemy anti-aircraft and counter-air defences,” the US Navy says in a statement on 1 April. “This lethality and survivability delivers a decisive advantage over adversaries.”

According to Raytheon, JSOW can strike targets 22km (12nm) away when released from an altitude of 500ft, or 130km (70nm) when released at 40,000ft. JDAMs, meanwhile, can hit targets up to 28km (15nm) away, depending on the speed and altitude of its release.

By comparison, the Russian SA-2 surface-to-air missile system can target aircraft within a 43km radius, and the mobile SA-6 can reach out 26km. More powerful Russian missile systems like the SA-10 (S-300) and SA-21 (S-400) have ranges approaching 150km and 431km, respectively, according to a report by the Mitchell Institute. 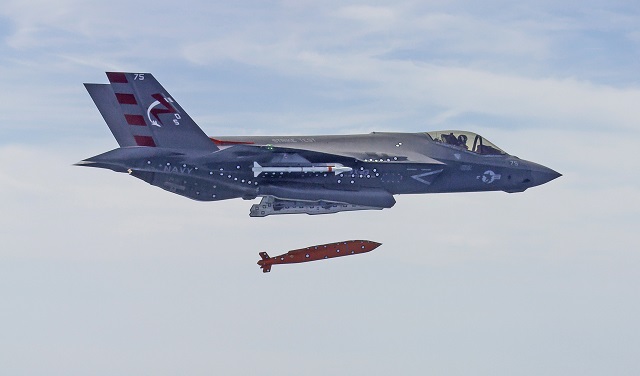 JSOW will come standard in the F-35 Block 3F configuration, and must be qualified for use by the navy's first combat-coded F-35C squadron at the time it declares initial operational capability (IOC) in 2018.

ASRAAM units were recently shipped to the USA for F-35 testing and the 227kg (500lb) Paveway IV was first dropped from a B-model in June.