The detective work of flightinternational.com readers has helped solve the riddle of a video clip that was sent to our offices late last week.

When it first surfaced the clip purported to show the final moments of a US Air Force Lockheed Martin F-16 fighter after being hit by a bird (encircled in the screen shot pictured below). However, dozens of readers emailed in the first two hours of the clip being on the website to correctly identify the aircraft as a BAE Systems CT-155 Hawk trainer (ZJ670/155202) belonging to NATO Flying Training in Canada (NFTC). 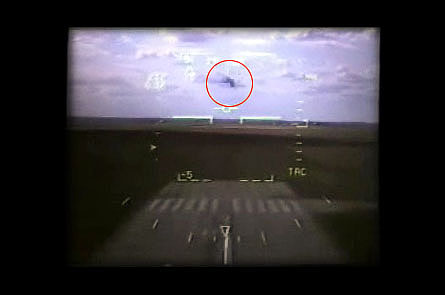 There were several clues, both visual and audio. Firstly, the accents are a mix between British and North American, not least the audio engine warnings which are in a formal British accent. One of the most thorough analyses we received was from Tim West, who works for the Panama City, Florida-based bird detection radar specialist DeTect. He pointed out that the USAF F-16s have a female audio alert, affectionately known as Bitching Betty.

Next the bird enters the engine to the left of the screen, indicating an air intake on the starboard side of the fuselage, rather than the centrally mounted air intake of the F-16. This was pointed out by (among others) Mike Bennett from the ejection seat safety campaign Project Get Out and Walk.

Finally, as Jon Berndt, editor, of the American Institute of Aeronautics and Astronautics Houston, Texas branch newsletter Horizons (again, among others) spotted, the pitot tube visible in the video is high up on the nose, unlike the position of the tube used in the F-16 cockpit.

The incident happened on 14 May 2004 while the aircraft was on a training mission involving UK Royal Air Force crew in Moose Jaw, Saskatchewan.

The official accident report from the Canadian directorate of flight safety says the mission was a "navigation trip and part of a conversion syllabus designed to familiarise an RAF student with the NFTC Hawk variant."

The crew was conducting some proficiency flying at low altitudes and the instructor had just taken control and as the aircraft approached the departure end of the runway when a bird was observed just left of the nose.

The aircraft suffered an engine failure as a result of the avian ingestion and the two pilots (Capt John Hutt from the Canadian air force and RAF Flt Lt Edward Morris) eject moments before the aircraft hits a ploughed field. The airspeed indicator shows 237kt (439km/h) and the incident takes 45s from bird strike to ejection. Both pilots survived the crash.
Flight International is enormously grateful to all those who contributed intelligence to resolving this mystery.

As Dave Trenkner, a fuel and hydraulic project engineer with Hamilton Sundstrand says: "Now let's put the rumour that this is an F-16 to bed once and for all."

External links:
Read the official accident report from the Canadian directorate of flight safety in English or French